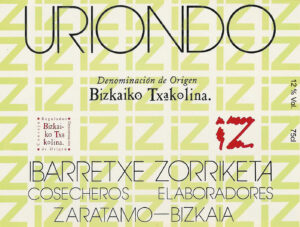 Uriondo is named after their barrio, located near the port city of Bilbao in the tiny Basque village of Zaratamo. It is the oldest and smallest winery in the region and was one of three original pioneers in the revival of txakolina production near Bilbao, with the creation of the Bizkaiko Txakolina DO in 1994. Uriondo, consisting of one tiny single vineyard (2.5 hectares), is situated in the countryside at an altitude of 175 meters with a southeasterly exposure. This vineyard, heavily influenced by the Atlantic climate, has a predominantly clay and sand mixture allowing for good retention of nutrients, so they never need to fertilize, and chemical inputs have never been added to their soils. Their mission was to employ the best viticulture by keeping everything very small and hands-on.

Unlike some of their newer neighbors, they eschew the use of international varietals, believing in the traditional local grapes of their ancestors: hondarrabi zuri, mune mahatsa, and txori mahatsa. All of their wines are spontaneously fermented with yeasts native to their vineyard. Following the tradition of the Bizkaiko Txakolina region, Uriondo’s txakolina is a still white wine and bottled without residual carbonic gas.

Vintage – 2020 was an extremely challenging and strenuous vintage for everyone, particularly for artisan producers in northern Spain. It was a year where the skill and experience of the producer’s work in the vineyards was paramount, as was the case with Uriondo. A rainy spring set the conditions for outbreaks of mildew, resulting in the loss of many grapes and lower yields; however, the bunches that were unaffected were of excellent quality. The summer was quite hot and dry, which pushed the harvest forward to early September, but some relief did come in the form of sporadic rainstorms, which provided much-needed relief for the drought-stressed vines. Overall, 2020 is more balanced than 2019, with excellent, fully developed fruit, good structure, and refreshing acidity. Just 1200 cases were produced in 2020 by this tiny micro-winery.

Vinification – After hand harvesting, the grapes are destemmed and undergo a brief two-hour skin maceration. Fermentation occurs in stainless steel tanks at 12°C to 16°C. Following the tradition of the Bizkaiko Txakolina region, Uriondo’s txakolina is a still white wine and bottled without residual carbonic gas. The wines are cold stabilized and were bottled on December 24, 2020.