Champagne Brocard Pierre produces handmade, terroir-focussed wines with great transparency and electricity, without the aid of chemicals or the winemaking sleight-of-hand common in the world’s most recognizable wine appellation. The vibe at Brocard Pierre is a reflection of Thibaud: fresh and young; jovial, but always on-point. He delivers precise, gastronomic Champagnes designed for maximum pleasure at the table with friends, without pretense.

Vigneron Thibaud Brocard is the fifth generation of Champagne Brocard Pierre to work his family vineyards near the village of Celles-sur-Ource in the Seine river valley, known as the Barséquanais area of the Côte des Bar, the southernmost subregion of Champagne. Côte des Bar, located about an hour north of Chablis in the Aube department of France, is the transition point between Champagne and Burgundy. It was part of Burgundy for centuries until the French Revolution. This cultural association still forms the basis for the region’s winemaking philosophy, as well as its traditions and gastronomic identity.

As a condition of Thibaud’s succession to the helm of the family business, he is only interested in pursuing wines of exceptional purity and character, without makeup or boundaries. His mission is to make the best, most delicious, and joyous wines possible from the geographically- and biologically-diverse Côte des Bar region. This statement may seem simple on the surface. Yet, it is a sentiment that is exceedingly difficult to attain, given the reality of the variable and often harsh climate of northern France. It takes ingenuity, dedication, and talent to bring ideals such as these to life. Thibaud’s vision is clearly defined and focussed on the clear transmission of the energy and singularity of his environment while having a damn good time along the way! This vision makes his project one of the most exciting and original in the region and it aligns perfectly with the values of De Maison Selections. We are honored to be the exclusive stewards of the Champagne Brocard Pierre in the US.

The Brocard family are descendants of the native Irish Kennedy family, who settled in Champagne in the 11th century. Thibaud Brocard’s great-great-grandfather George Brocard was the vigneron who founded the family Champagne business in 1932 with their vineyards in the Vallée de l’Ource. George was followed by Emile Brocard, Henri Brocard, and then Pierre Brocard, Thibaud’s father, for whom the company is currently named. In 2012, after spending five years apprenticing with some of the most respected names in Burgundy, Thibaud became the fifth generation of the Brocard family to take over the domaine and its 6.5-hectare vineyards. This developmental period formed the basis for the philosophy that Thibaud now applies to his family domaine. He produces mostly vintage champagnes from single-grape varieties (chardonnay, pinot noir, with a bit of pinot meunier), with each of his 11 parcels vinified separately. Although he produces more Blanc de Blancs, he has a real passion for pinot noir and his Blanc de Noirs, a complex cuvée that inspires him enormously.

Côte des Bar soils consist of limestone from two different parts of the Jurassic period. The older of the two is Kimmeridgian limestone marl from 150 million years ago, belonging to the second stage of the Upper Jurassic period. This soil has dense, compact layers of limestone and clay marl containing the abundant fossils of tiny oysters and other marine organisms. Kimmeridgian soils are often found at lower elevations, where it has collected as a result of erosion over time. The slightly younger, harder Portlandian limestone soils belong to the upper Kimmeridgian era and are usually found on plateaus and near the crests of hills. This soil is harder and more brittle, with calcareous marl elements, but contains no fossils. Thibaud feels that Portlandian soil brings salinity and bitterness to the wines and a very interesting and exciting new expression to Champagne. The Kimmeridgian and Portlandian soils of Côte des Bar continue south to Chablis, where they form the backbone of the region’s most famous Premier and Grand Cru vineyards. Côte des Bar’s unique geography is the primary reason it is so special and exciting for viticulture. The Côte des Bar wine region consists of a patchwork of idyllic hillside vineyards set above verdant, lush valleys cut by multiple small tributary rivers feeding the Seine and Aube rivers. With many different exposures, soil compositions, and micro-climates with mixed agriculture, forests, vineyards, and valleys, the Côte des Bar offers an incredible landscape to make unique, world-class wines.

Thibaud uses organic, biodynamic, and regenerative farming practices in the vineyards, which are integrated and in harmony with the biologically diverse, forested environment of Côte des Bar. He transitioned the Brocard Pierre vineyards to organic farming upon his return to the estate in 2012. He does not use any synthetic chemical products in the vineyard, and mildew is carefully managed with tiny doses of copper, as he is sensitive to its overuse. Brocard Pierre’s vineyards have been glyphosate-free for more than 20 years.

Thibaud works his vineyards with a balance of intensity and sensitivity, and the results speak for themselves in the bottle. While not fully biodynamic, he pays attention to the moon cycles, especially when pruning and de-leafing. While Thibaud operates with the utmost respect for his environment, he is not attached to any prevailing winemaking dogmas or trends, nor does he associate himself with any movement. Rather, he is an original, pragmatic thinker who applies real-world experience to achieve the best results.

“My way of working with the vineyards and wine is very simple. In my eyes, understanding and taking care of my vineyards is the biggest part of my job as a winemaker. I make mostly vintage wines from single grape varieties, without blending, from single parcels. Plots are always vinified separately with native yeasts, with extra-long aging on the lees.” -Thibaud Brocard

In the cellar, Thibaud employs a soft touch and prefers to vinify in stainless steel over oak barrels, as he feels it better preserves each parcel’s terroir and vineyard expression. Grapes are handpicked and sorted in the vineyard before being crushed very gently in a beautiful vertical Coquard press. Free-run juice goes into cement tanks for a cold soak on the gross lees for 24 hours before fermentation with native yeasts, exclusively for primary fermentation, as he feels that each yeast gives the wine the profile of the vineyard. Thibaud works non-oxidatively, and he notably utilizes nitrogen in the winery to protect his tanks and solera, which helps him keep the use of sulfur dioxide in the winery to the absolute minimum while preserving fruit and vineyard expression. This practice deserves mention and merit, as it is a tool that helps him achieve his goal of producing delicious wines for maximum enjoyment, made without faults or defects. His Champagnes have very little-to-no sulfur added, with an average of 18-32 mg/l of total SO2, depending on vintage and what his native yeasts give. Champagne Brocard Pierre is unfiltered and bottled without cold stabilization, using bentonite for a gentle fining.

Thibaud prefers long-aging on the lees in bottle (three to five years), as well as an average of nine months of post-disgorgement aging in bottle to allow his wines the proper time to integrate before release. Brocard Pierre’s entry-level and only blended-grape expression, Cuvée Tradition Brut d’Assemblage, spends three years on the lees in bottle before release, giving it one of the best quality-to-value ratios in the world of Champagne. The heart of his production is his mono-varietal, single-vintage wines from pinot noir and chardonnay, which are released after five years on the lees in bottle. The resulting wines have great complexity and definition, with incredibly long-finishes designed to elevate food pairings. The combination of these elements and more further reflect Thibaud’s deep respect for his customers and terroir, making him one of the brightest rising stars of the Champagne region. 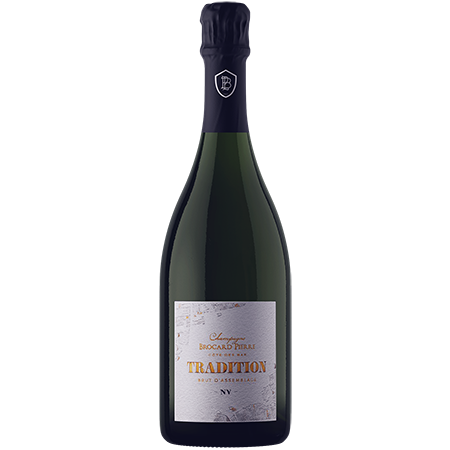 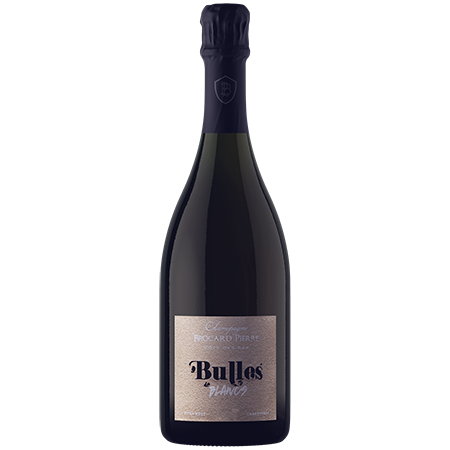