Do Ferreiro was founded in 1973 and is currently run by…

Gerardo Méndez with his son, Manuel, who shares winemaking duties, and daughter Encarna, who manages the family business. Gerardo Méndez was part of the original group of fourteen growers who elevated the region’s potential, as he and his father were integral in the formation of the original denomination of origin Rías Baixas in 1988. The first wine made by Gerardo without labels was in 1973, with the first labeled vintage wine from Do Ferreiro appearing in 1986. The Do Ferreiro house, Casa Grande, is located in Lores, at the foot of the Armenteria mountain range where it is protected from the fog from the south, facing the Ría de Arousa. Directly in front of the house lies the famed Cepas Vellas vineyard, where each vine is uniquely pruned to suit the personality of these old vines, which were already documented in 1850.

The vineyards follow organic guidelines, avoiding the use of pesticides and non-organic fertilizers. In addition, the family is devoted to the use of indigenous yeasts believing that through their usage, the true qualities of this terruño can appear.

They farm over 175 plots of albariño in the best sub-zone of Salnés. This valley’s proximity to the ocean and protection by mountain ranges has made its reputation as being the best area in Rías Baixas for viticulture. Do Ferreiro is world-famous for their Cepas Vellas albariño, which comes from a plot that is over 250 years old.

In addition to his work in creating the denomination,

Gerardo also began recovering old vineyards, farming them organically using natural compost, and restoring the traditional trellising methods. Gerardo is known for his absolute faith in the local emparrado system (pergola training), which he has adapted and refined over the years to allow more sun into the canopy, allowing for even ripeness and naturally lower yields. He lets his chickens roam through the vineyards the way his ancestors have done in the past, providing both natural pest control while contributing valuable nitrogen to the soil. Grapes are harvested by hand with great scrutiny, sorting the grapes in the vineyard, bunch by bunch, as opposed to using the famous “sorting table.” Gerardo always utilized the indigenous yeasts present in his vineyard for fermentation, long before it became a trendy marketing term. Here in Salnés, it’s just the way his father Francisco (known locally as “Pepe o Ferreiro” or “Pepe the Blacksmith,” hence the origin of the Do Ferreiro name) made his wines to sell to his neighbors.

Most of Gerardo’s neighbors in that era didn’t understand why someone would work so hard, risking their harvest by using indigenous yeasts and waiting to harvest until the grapes were perfectly ripe. Initially, they thought he was crazy, but as the wine started to achieve fame outside the region, people realized that he had been a visionary all along. Aspiring growers began to seek his advice in both farming and winemaking. Do Ferreiro was born from incredible raw material and an uncompromising dedication to quality, a legacy that continues today with his son, Manuel, and daughter, Encarna, all working together to craft Do Ferreiro.

They have also been working tirelessly for the last twenty years to resurrect an ancient family tradition of producing handcrafted orujo. Orujo is a pomace brandy (a clear spirit obtained from the distillation of the skins and lees left after pressing of the grape) from northern Spain. The full name of this style of brandy is “aguardiente de orujo,” translating to “pomace firewater.” While orujos are common across Spain, they are most prominent in Galicia. A common variation of Galician orujo is Licor de Hierbas, an herb-infused orujo macerated with a selection of herbs that impart its distinctive color and flavor.

Throughout the winemaking world, a tradition persists of using every possible aspect of the annual harvest. After grapes are pressed and fermentation begins, winemakers are left with the skins and pips as pomace. Residual must and the already fermenting alcohol from the pressing are also far too coarse to be included in fine wine production, which traditionally only uses free run juice or up to the first pressing of grapes for its base wine. Through careful distillation, winemakers began making pomace brandies that over time became integral parts of the local culinary traditions. Called grappa in Italy and marc in France, in Spain this wine-based spirit is famed as orujo. Galicia has the reputation of making some of Spain’s finest pomace brandies, capable of capturing the nuance and refinement of the original wine and pairing it with a fiery and heady spirit: Orujo de Galicia. To make pomace brandy of high quality requires an excellent source of grapes, skilled handling of the pomace after winemaking to limit oxidation, and meticulous distillation.

Do Ferreiro produces its orujo from a more than 250-year-old vineyard, the source of their world-famous Cepas Vellas albariño. Do Ferreiro Orujo de Galicia retains all of the subtle aromatics of white flowers and herbs that we associate with their exceptional albariño. The low yields of these incredibly old grapevines naturally limit the annual production. Do Ferreiro double distills their pomace in an alquitara, a primitive still most often used in Spanish brandy production.

Do Ferreiro’s Licor de Hierbas de Galicia is an herbal liqueur macerated with a selection of herbs that impart its distinctive color and flavor. The base distillate, Orujo de Galicia, is produced from a more than 250 years old vineyard, the source of their world-famous Cepas Vellas albariño. The low yields of these incredibly old grapevines naturally limit the annual production. Do Ferreiro double distills their pomace in an alquitara, a primitive still most often used in Spanish brandy production, diverting some of this distillate to make the regional favorite Licor de Hierbas. This aromatized spirit comes in at 70 proof and is macerated with anise, savory herbs such as saffron, chamomile, rosemary, and green walnut, and then sweetened with locally grown cane sugar. 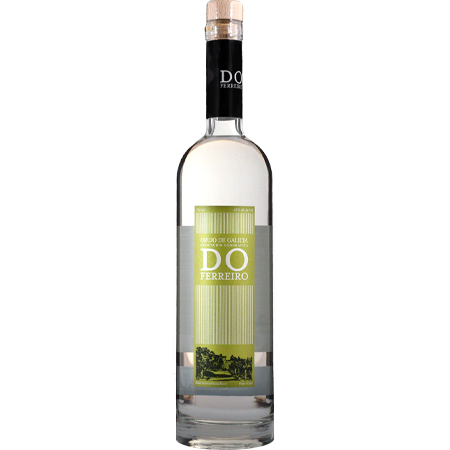 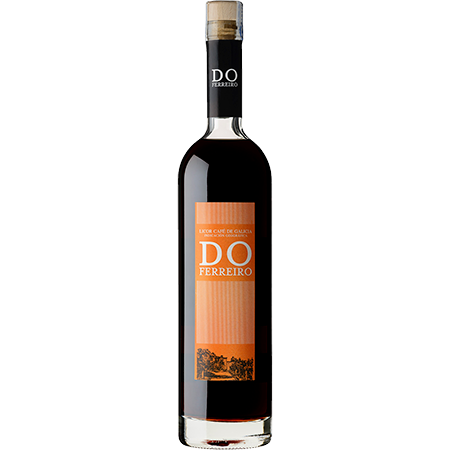 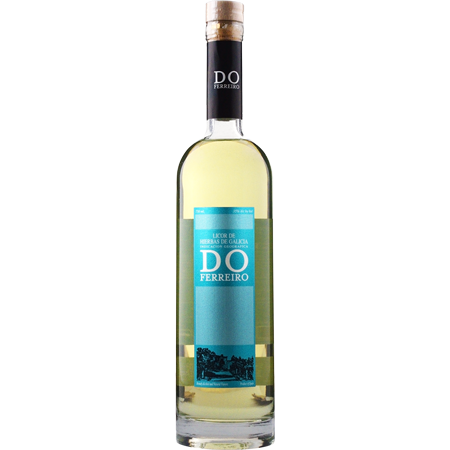