Galicia is not the Spain of popular conception, and it is a far cry from the image of sun-soaked beaches and paella many have. Cool, rainy, and green; Galicia’s climate influences derive from the Atlantic, not the Mediterranean. In its language, its culture, its geography, and even in the grapes grown here, this is a different side of Spain. Here the language spoken is Gallego, closer to Portuguese than Spanish.

The known history of the region begins with Finis Terrae, which was a pilgrimage route through Galicia following the Milky Way all the way to Fisterra (Finis Terrae), which in Roman times was believed to be the end of the known world; a magical place where the living could get closest to the land of the dead. The Artabri is the first known ancient Gallaecian Celtic tribe that once inhabited the area. They were followed by Phoenicians, Romans, and finally the Christian settlers from France who established the monasteries and religious orders which came to dominate the agricultural and economic landscape of Galicia.

Before the eighteenth century, everything belonged to the monasteries until an extended economic and social process of selling the lands and property of the religious orders to private individuals resulted in the distribution of tiny parcels of land to many owners. This process is significant, as it explains the current landscape where the average vineyard in the region is 0.4 hectare. After the Phylloxera epidemic, hybrid and high yielding grapes such as palomino were planted for weight. It wasn’t until the late 1970s and 1980s that the first generation of quality growers began replanting with indigenous grapes like albariño, loureiro, godello, treixadura, caiño tinto, espadeiro, loureiro tinto, and sousón, reclaiming the identity of the region.

In the seventeenth century, the practice of distilling wine pomace into spirits was carried to Galicia by monks along the pilgrimage route of the Camino de Santiago. The people of Galicia took to the practice of making pomace brandy, called orujo in Spain, and integrated it into their culture. Flavored orujos are also common in Galicia: Hierbas de Galicia feature a maceration of traditional herbs and are produced in dry or sweetened variants. The common regional practice of adding a splash of orujo to coffee inspired the creation of Licor de Café de Galicia, a coffee-infused orujo. The production and classification of all of these styles are overseen by the Orujo de Galicia Indicación Xeográfica denomination. The denomination requires the base alcohol to come from wine or pomace of the Galician denomination of origins of Rías Baixas, Ribeira Sacra, Ribeiro, Valdeorras, or Monterrei. Only small-scale, traditional distillation processes are allowed, and all orujos must undergo qualitative testing by the denomination.

This viticultural region takes its name from the estuaries that flow into the lower parts of Galicia. These waterways create a very unique ecosystem full of life, both in the ocean and on land.

The most famous of Galicia’s denominations, Rías Baixas has its roots with its founding in 1984. In 1988 three sub-zones were demarcated: Val do Salnés, Condado do Tea and O Rosal. Additional sub-zones were later introduced, with Soutomaior added in 1996 and Ribeiro do Ulla in 2000.

The denomination comprises 3,814 hectares and is predominantly planted with the Albariño grape variety. Other permitted varieties are Loureiro, Treixadura, Caíño Blanco, Souson and Caíño for the reds.

The soils range from decomposed granite, found predominantly in the Salnès Valley, to alluvial soils in the O Rosal and Condado sub-zones. The dominant Salnés sub-zone, where more than 50 percent of the vineyards are located, enjoys a unique orientation towards the sea and is protected by a range of mountains that inhibits the entrence of the fog. The proximity to the ocean creates a unique micro-climate, with sea breezes lending the wines their distinct flavor profiles.

The parcels in this region are extremely small and are owned by many small growers. This creates great challenges in producing wines of any significant quantity, especially when attempting to attain a quality product. 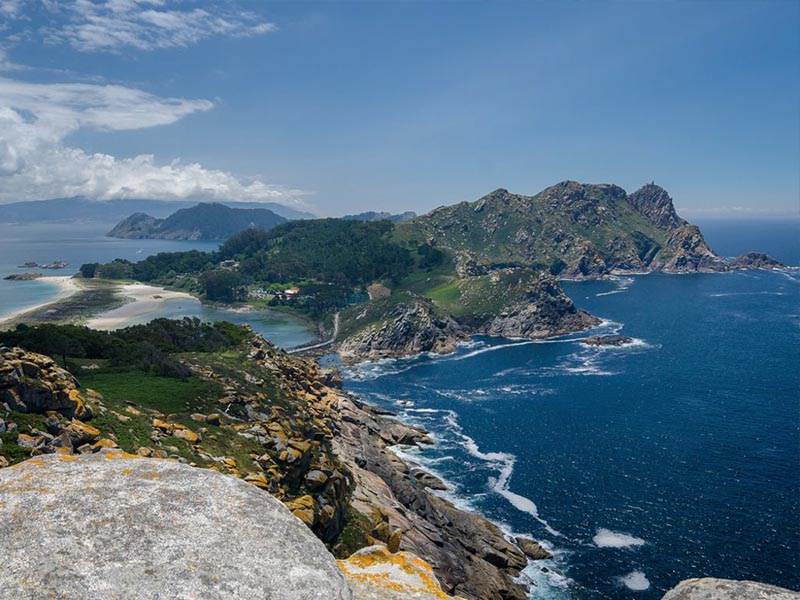 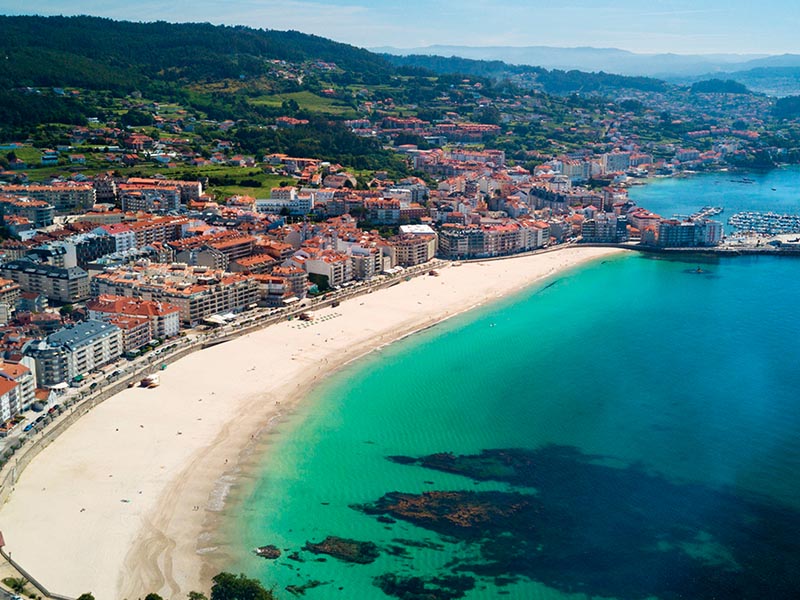 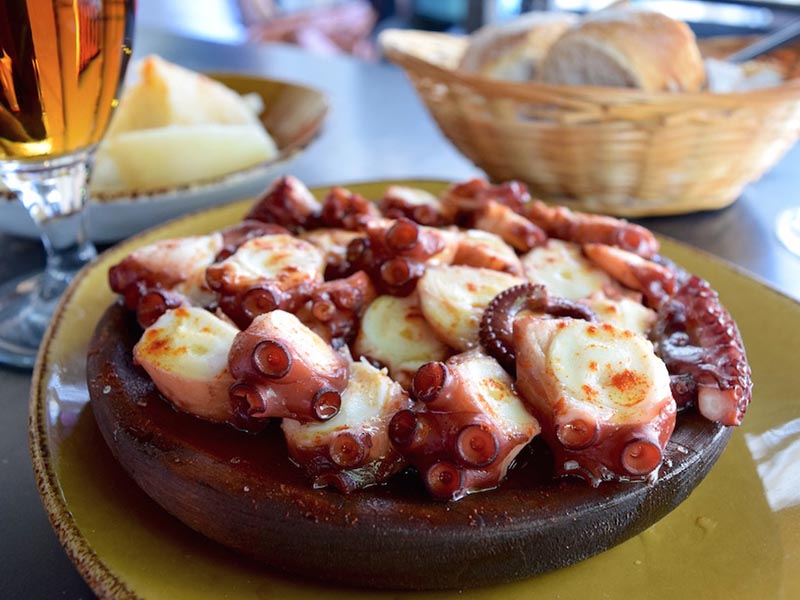 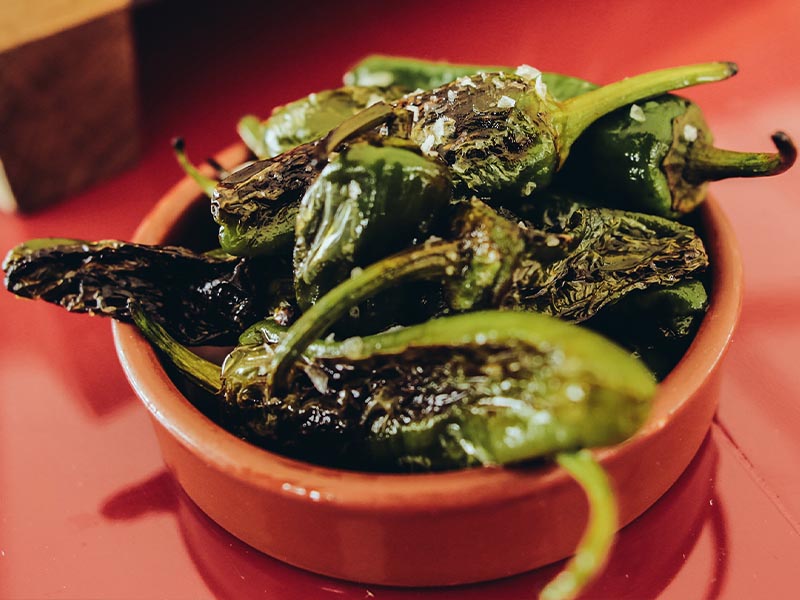 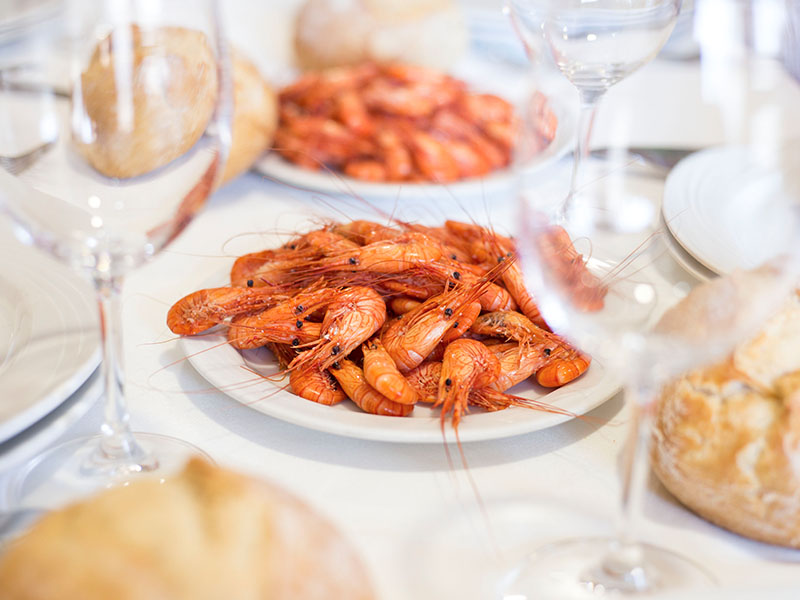 Wines and Spirits from Rias Baixas

This area is named for the many chapels that dot the rugged landscape. Founded in 1996, the denomination currently comprises 1,270 hectares that are predominately planted with the Mencía grape. Extremely removed from the beaten path, this area was once famous for magnificent red wines. The incredible landscape, with its terraces cut out of the mountainsides, recalls an era in which labor was cheap and plentiful. Today, all that remains are very small plots maintained against the hardships of a demanding landscape.

There are two main rivers that define the area: the Miño River and the Sil River. The Sil River flows on an east-west axis and merges with the Miño River which flows on a north-south axis. These two rivers join forces in the center of the region and then flow into the Atlantic Ocean, creating the natural boundary between Spain and Portugal along the way.

The Chantada and Miño sub-zones are located along the Miño River and are characterized by a very wet climate. This is especially true of the Miño sub-zone. Carved terraces step down to the meandering river. This area is extremely humid and enjoys plentiful rain. Vegetation is abundant, with ferns growing alongside the vines. The soils tend to be composed of losa, a type of brown, decomposed slate.

On the Sil River we encounter the other three sub-zones. The first, on the south side of the river, is the Riberas do Sil. This area once had terraces planted all along the river, but few remain in use today. The area on the north (right) bank is the Amandi sub-zone. This is the most extreme of the sub-zones with terraces that jut down on 60 degree slopes. The soils here are also losa but vegetation is sparse. The vineyards have better exposure, facing south but receiving a great cooling and refractory effect from the river. Following the river west, the soils tend to have more granite, especially around the town of Doade, and the terraces become less steep. The easternmost sub-zone is the Quiroga-Bibei area. This area lies along the natural border with the Valdeorras denomination and is named after the Bibei River, which meets the Sil River here. The climate is completely different in this sub-zone, with much harsher and drier weather. Wild herbs such as rosemary, fennel and thyme grow throughout this area; the soils are a mix of granite and slate. Like the rest of the denomination, the vineyards are all terraces cut out of the mountainsides. 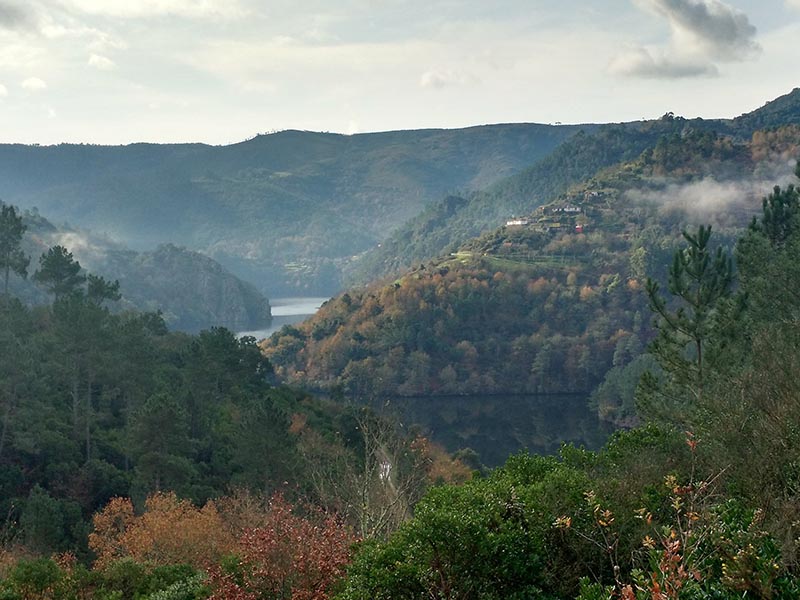 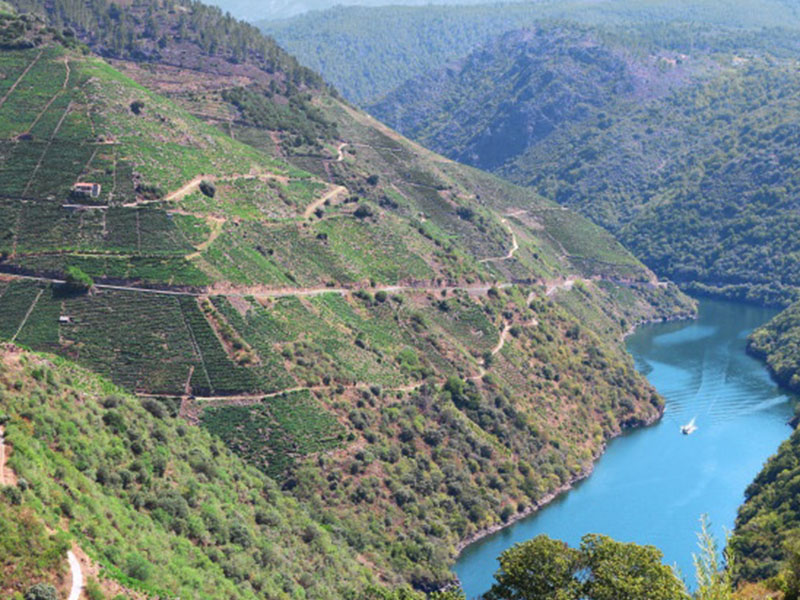 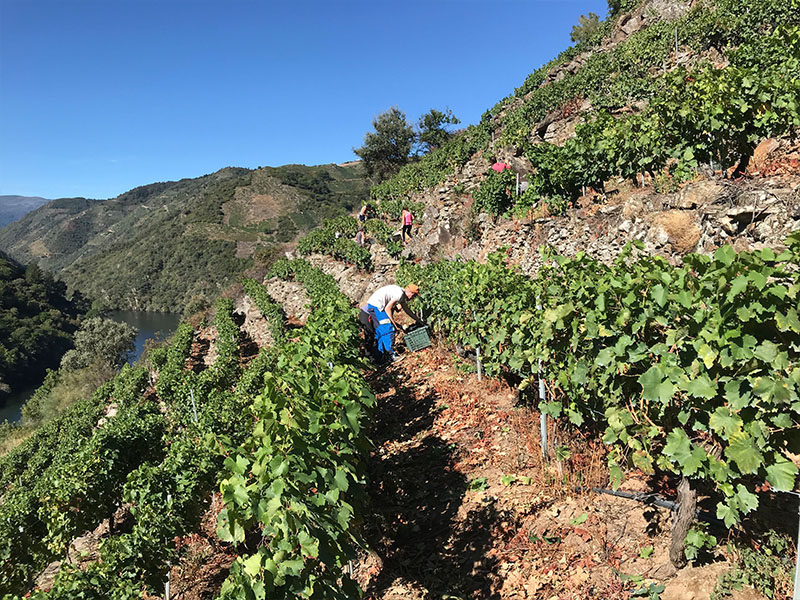 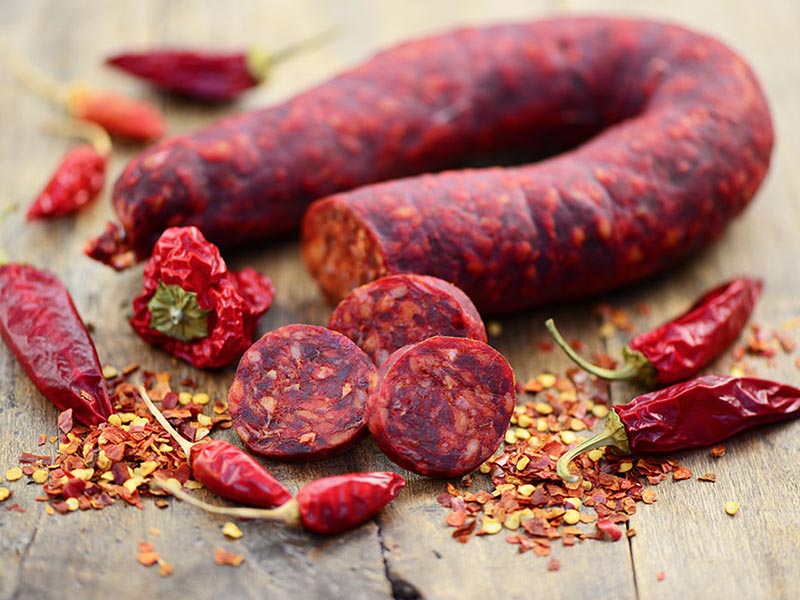 Ribeiro is one of the oldest denominations in Galicia. The denomination has its origins in regional by-laws established in 1594 to govern the production and sale of wines from the area around the old market town of Ribadavia. The modern D.O., based around Ribadavia, was founded in 1956 and currently comprises 2,767 hectares. This old area was once known as the home of the longest-lived white wines of Galicia. Located on the Sil River, the town of Ribadavia rises up above the river with the old bodegas still standing in the town square. It was in these bodegas that merchants used to sell wine in barrels, roll them down the street to the docks, and load them onto the ships that would export them across Europe and even to the New World.

The predominant grape planted in the denomination is Treixadura. In addition to Treixadura, there are plantings of Albariño, Lado, Torrontés, Loureiro, Albilla for whites and Caiño for the reds. The soils here are predominantly granite. Temperatures can be quite high during the summer months. The vineyards border the rivers, where they are protected from the excessive heat of the valley floor, which tends to produce wines lacking freshness. Historically, the best vineyard sites are up on the hillsides where the cooler air refreshes the grapes and creates a longer growing season. 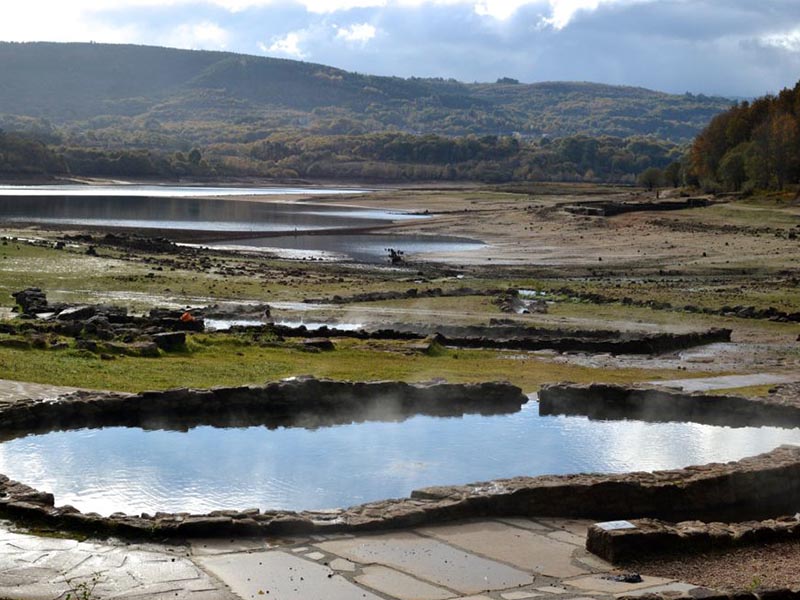 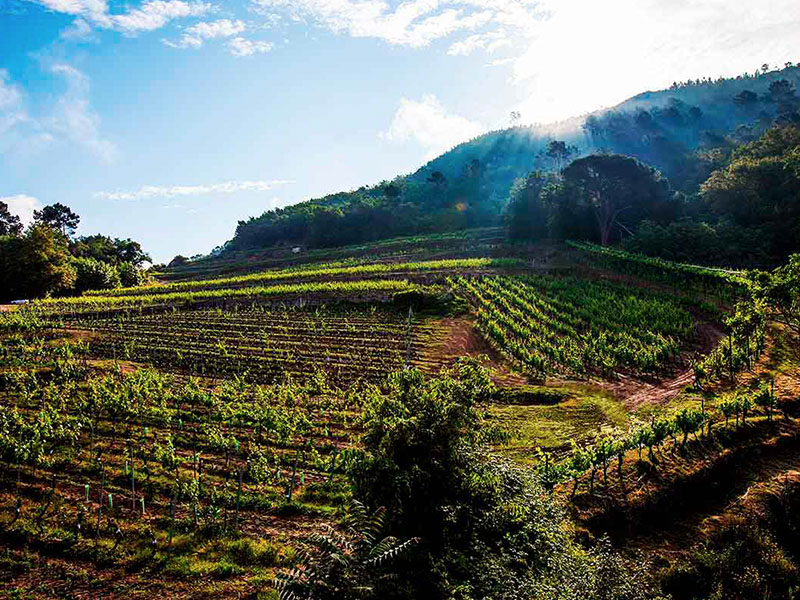 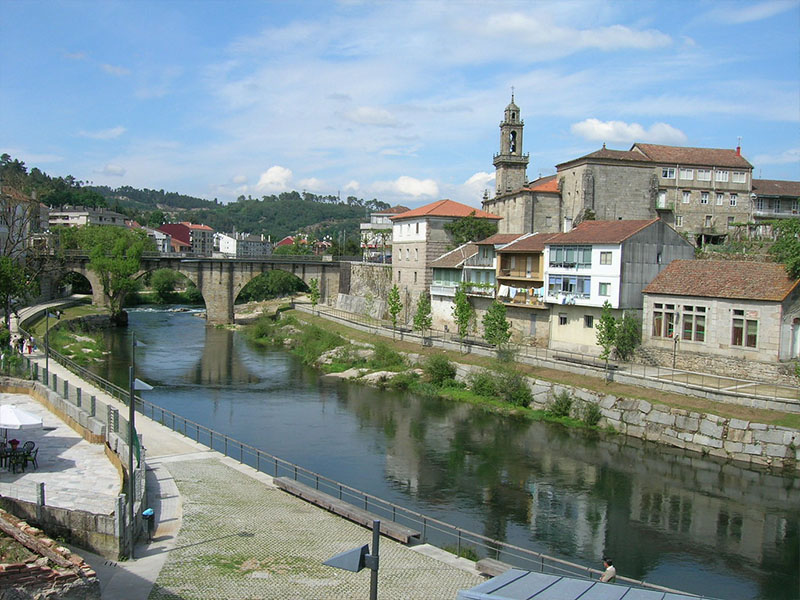 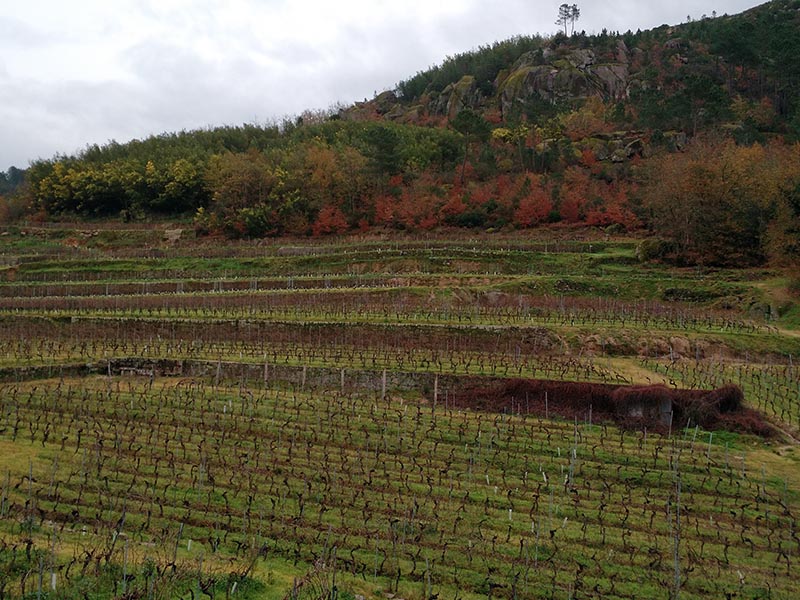 One of Galicia’s more historically significant wine producing regions is Valdeorras, located at the eastern extremity of Galicia. Inhabited since pre-history, settlements in this area greatly expanded with the arrival of the Romans who came in search of metals and ore. They founded mines within the territory and used water to bore tunnels and extract slate. In the process, they built new towns, fortresses and trade routes and began planting grapes on the hillsides.

Made up of 1,300 hectares, this denomination was founded in 1977. The principal grape variety planted here is Godello but there are many plantings of other grapes such as Palomino Fino and Doña Blanca. These other grapes were planted mainly for their productivity and not their quality after the region was devastated by phylloxera in the late nineteenth century. There are also some plantings of Mencía and Garnacha Tintorera for reds. In the 1970s Godello was reintroduced to the region and then in 1985 a major study was undertaken to identify the original clones of Godello that were best suited to the area. This study allowed a replanting of Valdeorras based on quality as opposed to quantity.

There are several different viticultural areas or zones within Valdeorras, with the predominant ones sitting between the towns of O Barco and A Rúa. The other important area of cultivation surrounds the town of O Bolo. The soils tend to vary from slate in the O Barco-A Rúa area to granite in the O Bolo area. The best vineyards are those located above the rivers, since these benefit from a cooler climate. 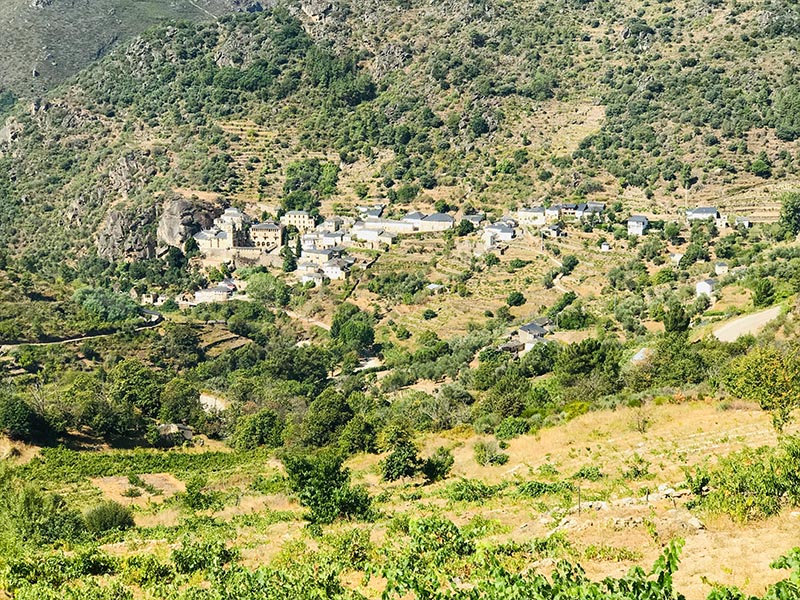 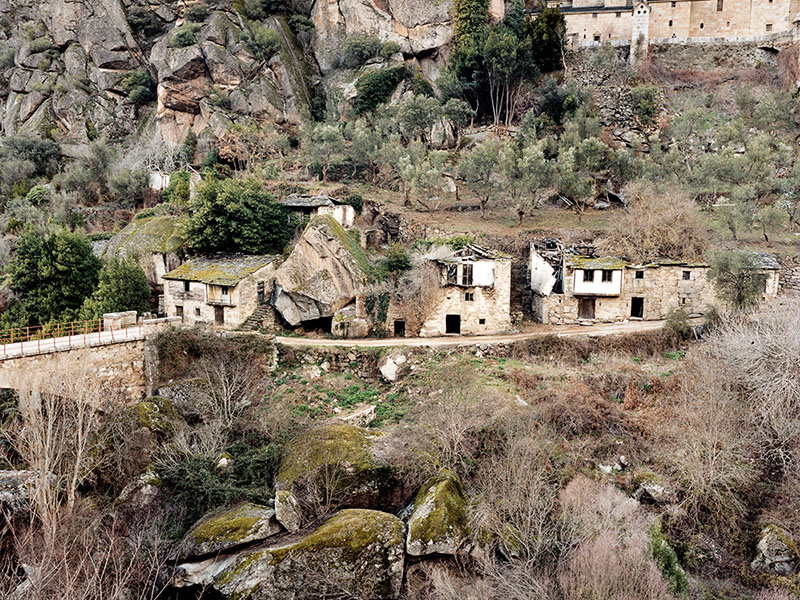 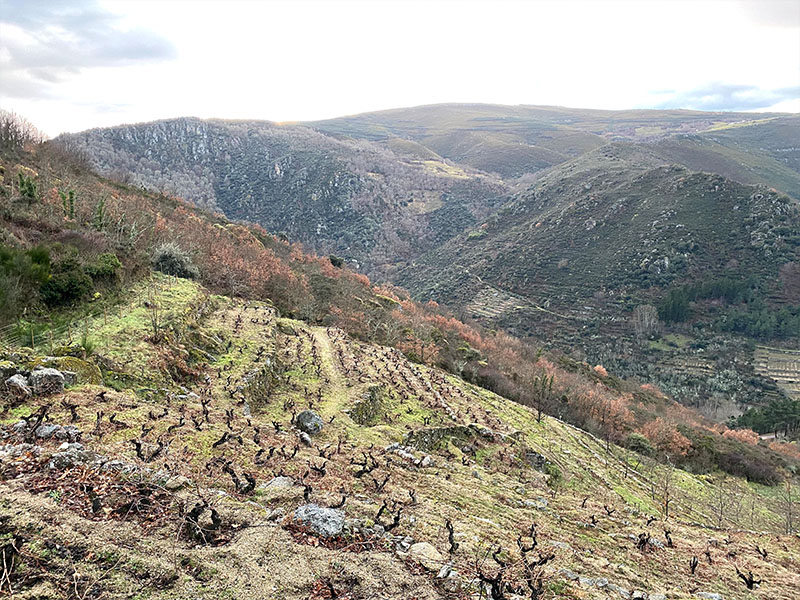 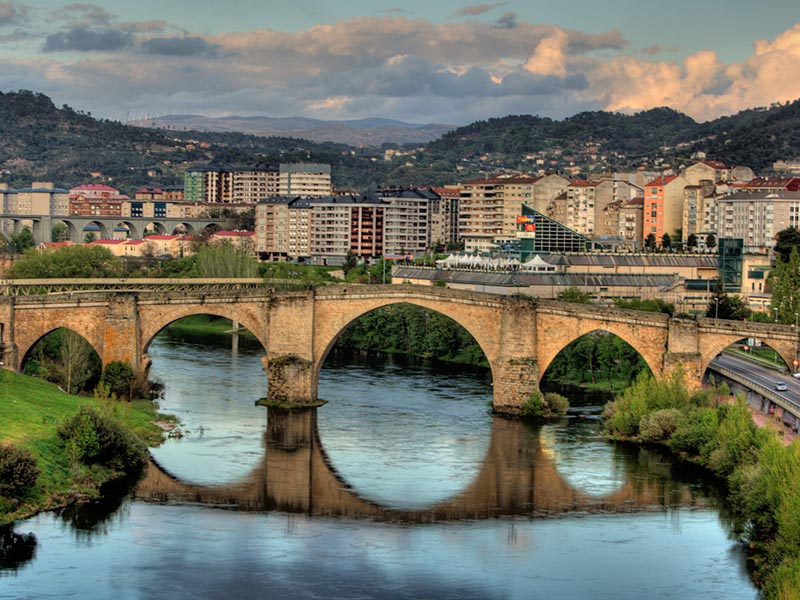