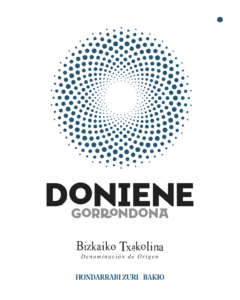 The Doniene cuvée is viticultor and winemaker Itziar Insausti’s personal mission to show the world that hondarrabi zuri, the indigenous grape of txakoli, can be more than just a lighthearted wine; it can be serious, multifaceted, and truly world-class. The same battle has been fought in the past decade to great effect within the Crus Communaux of Muscadet in France to differentiate the producers who are shooting for higher quality and terroir-driven styles from the everyday party wines used to wash down oysters. Neither style is better or worse, yet it is necessary to differentiate the intent. The latter requires an incredible amount of time, persistence, and monetary sacrifice in the form of lower yields for the vigneronne who wants to create something truly distinctive. Such is the case for Doniene, with yields less than half of the permitted allowance by the D.O.

Doniene is 100% hondarrabi zuri aged on the lees, well structured, and lacking any residual CO2; it demonstrates that the region can make wines that belong in gastronomic settings and don’t need to be consumed early. The grapes are sourced from some of their oldest white vineyards with significant clay content in the soils, perched at 250m high above the Bay of Biscay, surrounded by pine forests. Bakio has a mild climate, as the narrow valley traps the sea breeze, which makes for warmer winters and cooler summers. Itziar’s pioneering use of native yeasts for fermentation reveals the complexity of each site.

Vintage Notes – 2019 was an outstanding vintage in the Bizkaiko Txakolina appellation, possibly the best vintage of the decade for quality, complexity, and age-ability. Spring was rainy, with mild temperatures lasting through early June. Summer saw little rainfall, with rain concentrated in a few specific storms, with a majority of clear, sunny days. The summer temperature was moderated by a cool breeze from the Cantabrian Ocean, with a long, even ripening period favoring exceptional phenolic development. The 2019 harvest took place between September 26 and October 12 under ideal conditions, with an absence of disease in the vines and the health of the grapes was extraordinary. 1,600 cases produced.

Vinification – After a manual harvest, the grapes are destemmed and given a brief cold soak. Only the free-run juice is used, and each parcel is vinified separately using only native yeasts. The wine then rests on its lees until bottling the following March. Very little sulfites are used in the vinification process, with less than 15ppm total.