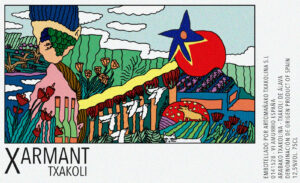 In Spain’s coastal Basque Country, “Xarmant” (char-mant) means ‘charming’ and txakoli is the joyous, light, white wine shared amongst friends with northern Spain’s legendary cuisine. Xarmant is made from the highest quality, sustainably-farmed, estate vineyards from the verdant Amurrio valley in the Basque Country, close to the Bay of Biscay on Spain’s rugged, green northern coast. Its proximity to the Atlantic Ocean creates a unique, ideal microclimate to produce this ‘charming’ wine.

Artomaña Txakolina is located near the town of Amurrio at 350m elevation in the verdant Orduña Valley in the foothills of the Sierra Salvada mountains. The village is next to the Nervión river before the magnificent waterfall of Salto del Nervión drops over 270m, one of the highest and most beautiful waterfalls in all of Western Europe. The Orduña Valley faces the Atlantic Ocean, where its proximity creates a unique, ideal microclimate. The valley forms the geological and climatic border between the Castilian plateau and the Nervión river basin. The dominant wind is north-northwest, which is cool and loaded with humidity from the Cantabrian Sea. On the hottest days of summer, the sea breeze arrives midday to cool the vines. Artomaña utilizes a blend of sustainably grown estate grapes, the traditional varieties indigenous to the Basque region: Hondarrabi zuri with gros manseng, petit manseng, and petit corbu.

Vintage – 2020 was an extremely challenging and strenuous vintage for everyone, particularly for artisan producers in northern Spain. It was a year where the skill and experience of the producer’s work in the vineyards was paramount, as was the case with Artomaña. A rainy spring set the conditions for outbreaks of mildew, resulting in the loss of many grapes and lower yields; however, the bunches that were unaffected were of excellent quality. The summer was quite hot and dry, which pushed the harvest forward to early September, but some relief did come in the form of sporadic rainstorms, which provided much-needed relief for the drought-stressed vines. Overall, 2020 is more balanced than 2019, with excellent, fully developed fruit, good structure, and refreshing acidity.

Vinification – Grapes are harvested separately, based on ripeness, and the must is extracted using a pneumatic press. After a brief cold maceration, each grape variety ferments separately in stainless steel tanks at low temperatures, utilizing native yeasts. The wine then ages on the lees for two months with some bâtonnage for selected tanks. The wine is then blended and stored at low temperatures in stainless steel tanks for stabilization until bottling. Per the style in Álava, Xarmant is bottled with less naturally occurring residual carbon dioxide than txakoli from other regions, like Getaria.