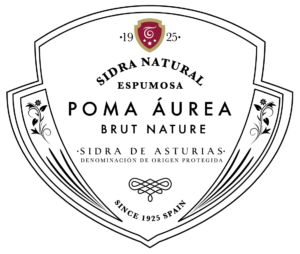 Trabanco’s cider house is located in the town of Gijón. It contains an incredible array of old chestnut barrels dating back to the beginning of the 20th century, with some large enough to hold up to 20,000 liters. The enormous square presses are made of wood and are just as old as the barrels. Trabanco has also incorporated some modern approaches to widen its array of natural apple products, introducing new items from vinegar to apple juice to the Poma Áurea, a naturally sparkling apple cider.

Trabanco’s Poma Áurea is an innovative sparkling cider made from a selection of raxao and regona varietals from the best orchards within the denomination. The resulting fully-sparkling cider is named Poma Áurea for its special golden color. Poma Áurea is the first brut nature cider developed by Trabanco bearing the Protected Designation of Origin (PDO) “Cider from Asturias” qualitative label. The resulting cider has fine, persistent bubbles similar to other high-quality sparkling beverages.

Vinification – Estate regona and raxao apples are meticulously hand-picked and sorted before being pressed in an over 100-year-old wooden cider press. The must is transferred to traditional, old chestnut wood barrels where it ferments with indigenous yeasts. Once fermentation is complete, the cider is placed in pressurized stainless steel tanks for a controlled, secondary fermentation at low-temperatures for four months.