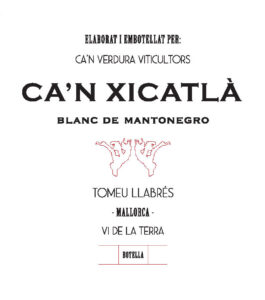 One of the most exciting and special wines made on Mallorca, Ca’n Xicatlà is from a single, old vineyard, offering a window to a bygone area of viticulture. It is a very limited production wine which can lean towards white or orange in color, depending on the vintage, produced from 1ha of traditional en vaso (goblet) trained vines planted in the 1950s near the village of Camí Vell de Muro.

Ca’n Xicatlà is planted to the indigenous mantonegro cabellis grape, a rare mutation of the red mantonegro. Cabellis is a variety of mantonegro which was widely planted in Binissalem during the mid-20th century. However, nowadays, it is near extinction due to its irregular phenolic maturity, giving annual variation of white, pink, and red grapes on the same plant. The local vine-growers coined the name cabellis to distinguish it from the regular red mantonegro. Even though genetically and legally, both variants are designated as mantonegro, the cabellis variant produces wildly different wines than its red counterpart.

Ca’n Xicatlà is planted in call vermell soils: a red, iron-rich clay, limestone soil typical of Binissalem. This parcel has a high quantity of gravel; thus it is well-drained, increasing the influence of minerality, as the roots of the old vines are forced to dig deep for hydration.

Tomeu Llabrés is a viticultor, practicing minimum intervention winemaking and low impact viticulture by leaving the cover crop during the cold season and encouraging biodiversity within his parcels and environment through polyculture. In his converted garage winery in the center of the ancient town of Binissalem, his wines are handmade, without additions, subtractions, or corrections. His primary objective with each cuvée is maximum respect and transparency for his terroir and culture, as well as for the customers who enjoy his wine.

Vinification – Bunches are hand-harvested in small boxes. Grapes are de-stemmed and directly pressed. The must undergoes a cold static racking of four days off the gross lees. The must is transferred into new and used 500L French oak barrels where spontaneous alcoholic fermentation takes place, using only the native yeasts. Only a small amount of sulfur is added after alcoholic fermentation. Malolactic fermentation does not occur. The wine is aged for ten months in barrel followed by a further one month in stainless steel. Light bentonite fining.

→ Back to Ca’n Verdura