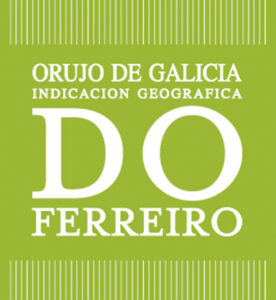 Throughout the winemaking world, a tradition persists of using every possible aspect of the annual harvest. After grapes are pressed and fermentation begins, winemakers are left with the skins and pips as pomace. Residual must and the already fermenting alcohol from the pressing are also far too coarse to be included in fine wine production, which traditionally only uses free run juice or up to the first pressing of grapes for its base wine. Through careful distillation, winemakers began making pomace brandies that over time became integral parts of the local culinary traditions. Called grappa in Italy and marc in France, in Spain this wine-based spirit is famed as orujo. Galicia has the reputation of making some of Spain’s finest pomace brandies, capable of capturing the nuance and refinement of the original wine and pairing it with a fiery and heady spirit: Orujo de Galicia. To make pomace brandy of high quality requires an excellent source of grapes, skilled handling of the pomace after winemaking to limit oxidation, and meticulous distillation.

Do Ferreiro produces its orujo from a more than 250-year-old vineyard, the source of their world-famous Cepas Vellas albariño. Do Ferreiro Orujo de Galicia retains all of the subtle aromatics of white flowers and herbs that we associate with their exceptional albariño. The low yields of these incredibly old grapevines naturally limit the annual production. Do Ferreiro double distills their pomace in an alquitara, a primitive still most often used in Spanish brandy production.

Tasting Notes: This Orujo de Galicia is something of a wild child, full of flavor and nearly impossible to pin down. The vinous quality is clear, but presents in a way that feels distinctly Galician: mineral, verdant, and laced with iodine. Blooms of white flowers and orange peel in the finish are reminiscent of the Cepas Vellas albariño itself.

Pairing Notes: Orujo is traditionally served chilled as a digestif, but is also common in a carajillo, a hot coffee cocktail with orujo, espresso, and a hint of sugar (we like it with Ethiopian beans or other vegetal styles). In cocktails, Orujo pairs well with gin, dry vermouth, fino sherry, and Jacoulot Crème de Pêche.

→ Back to Do Ferreiro Spirits

→ Back to Do Ferreiro