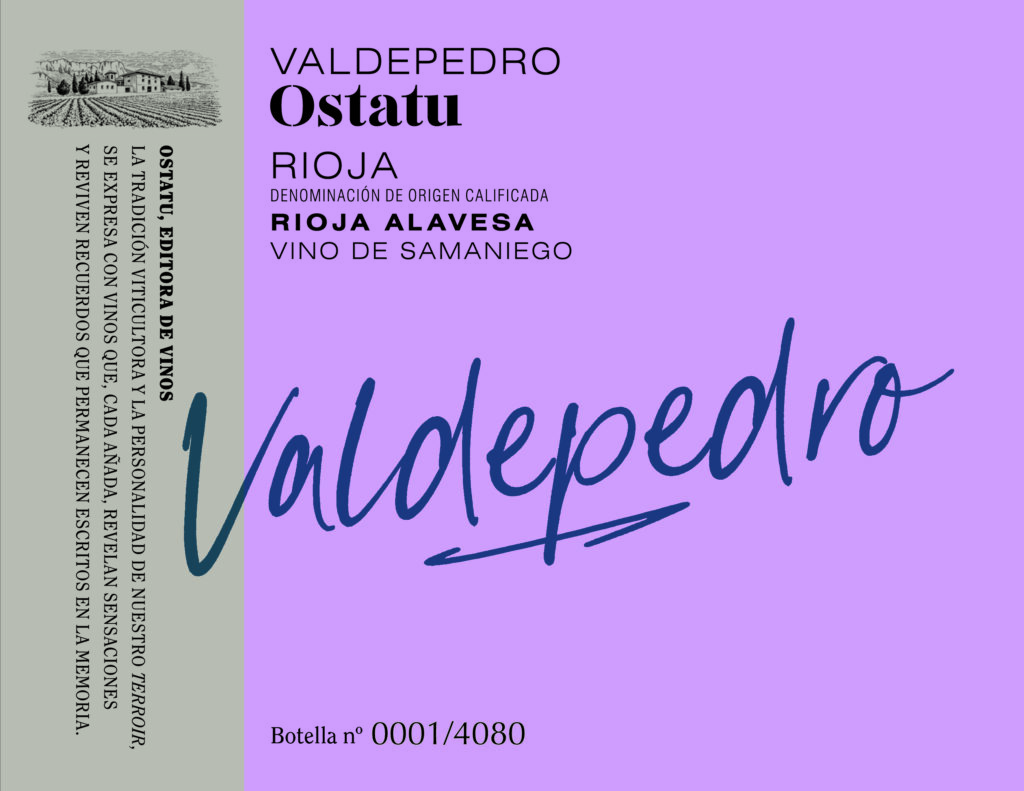 In their role as leaders for sustainability and regenerative farming in their native Rioja Alavesa, the Saenz de Samaniego siblings have obtained their organic farming certification for their entire production in 2022. This task is complicated immensely by the fact that, in Rioja, their dozens of tiny plots must each be certified individually. The standard for organic viticulture is exceptionally high in Spain, making them a model for other nations. The fact that Ostatu exclusively owns and farms the entirety of their single vineyards allows them total control of the production from start to finish. Such is the dedication and commitment of the Saenz de Samaniego family. If this were Piemonte, the wines would cost many times more than they currently do in Rioja Alavesa, exemplifying the inherent value there.

Tempranillo grapes come from the Valdepedro plot in the municipality of Samaniego planted in 2000, at the foot of the imposing Sierra de Cantabria-Toloño, at an altitude of 630m. Valdepedro has mainly limestone soil with some clay holding it together. Lying directly in the foothills of the Sierra Cantabria mountains, the vineyards of Samaniego have a Mediterranean climate with a strong Atlantic influence. Not only has the Valdepedro vineyard been farmed organically without synthetic inputs since the 2010 vintage, but they have also encouraged the regeneration of the soil and environment through the integration of native fauna. The vineyard is surrounded by a grove of holm oaks, oaks, junipers, thyme, lavender, old olive, and almond trees. Ostatu is pure Cantabrian mountain viticulture at its finest, as many have made comparisons with the best wines of Italy’s Alto Piemonte and Valtellina regions. We don’t disagree.

Vinification – After a manual harvest in small baskets, the grapes are destemmed and crushed with a brief pre-fermentation cold-soak and then fermented by native yeasts in stainless steel tanks without added sulfur. The fermentation lasts 14 days at a temperature of 24°C, with occasional gentle pump-overs. The wine is then racked into a large 500L, previously-used French oak foudre for malolactic fermentation, followed by seven months of aging in 1500L concrete eggs. Sulfur is not added during the process. 4000 bottle production.