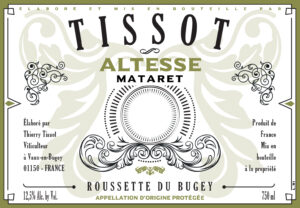 Mataret is a very special vineyard overlooking the idyllic French sub-Alpine village of Vaux-en-Bugey. Abandoned at the onset of WWI, it was widely considered by locals to be the most privileged vineyard site lying on the steep mountainsides surrounding the village. Mataret consists of three hectares of calcareous clay soils with blue marl and veins of shale facing southwest, at 350m elevation.

Clearing the site was a monumental undertaking, with the slope reaching up to 45 degrees and a thick cover of brush and chestnut trees. All of the labor to clear almost a century’s worth of forest growth was done by hand. Thierry Tissot replanted his grandfather’s vineyard in 2001 with two of the most interesting traditional local varieties: altesse and mondeuse.

Mataret has never seen any herbicides or pesticides, having been abandoned to the forest before the introduction of chemical treatments. It has always been farmed organically by Céline and Thierry Tissot, certified since 2019. The Tissots have brought back to life one of the most pristine and exceptional vineyards of Bugey.

Vintage – 2018 saw an arid spring with lots of buds after the frosts of 2017. June was mild with good plant growth. July, August, and September were hot and dry, with just a few storms bringing needed moisture—excellent conditions for ripening. Harvest occurred on September 18 for the altesse variety.

Vinification – After a manual harvest, the wine is fermented with native yeasts in stainless steel at 15ºC, then at 20ºC to finish off all the sugars. Aged on fine lees for six months and then extensively in bottle before release. No residual sugar.