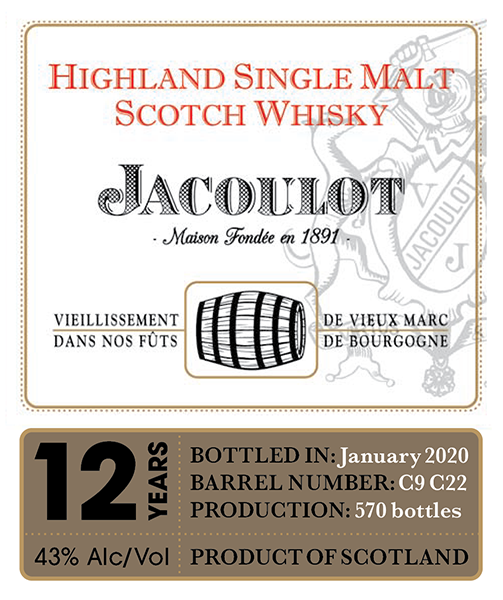 First, water; as with vineyards in Brandy from Burgundy, the water source is a fundamental factor in the profile for Scotch Whisky. Philippe sought to partner with a distillery that crafted a whisky that would blend well with his casks and came upon Tullibardine in the Highland area. The distillery started out as a brewery in the 15th Century due to its revered water source from the Ochil Hills that takes 15 years to reach the final resting point. This pristine water, paired with the distillery’s clean, non-peated style of Highland whisky, seemed an ideal complement to Philippe’s vision. After many tastings, Philippe sent Marc barrels to Scotland to finish a particular blend of casks of a similar age. The whisky spends nine and a half years maturing in a selection of ex-Bourbon casks, chosen by Philippe, and then spent an additional two and a half years finishing in Jacoulot’s ex-Marc barrels. The inaugural release of 325 bottles was bottled in 2017.

Usage: A perfect evening sipper, either neat or with a small amount of water.