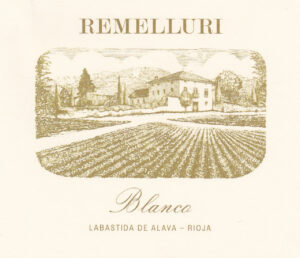 Remelluri Blanco has been the passion project of Telmo Rodríguez since his early days as a winemaker, becoming one of the most coveted and sought after cult wines in all of Spain. The story goes that in the early 1990s, Telmo’s father Jaime would never let him experiment with the red wines of Remelluri because the risk of failure was too great to make substantial changes. Instead, Telmo was given free rein to create a white expression of the Remelluri farm. For this project, he was inspired by his time spent learning winemaking in France with Gérard Chave in Hermitage, Clape in Cornas, and Château de Beaucastel in the southern Rhône. There Telmo learned to make wines that he refers to as “human-scale wines” that spoke of people and place, wines with soul. That was exactly the type of terroir-driven white wine he set out to make in Remelluri’s high-altitude vineyards (700m+) on the mountainside, overlooking the Ebro river valley, Rioja sprawling out below in every direction.

The concept of Remelluri Blanco remains the obliteration of grape variety by using a number of co-planted vines, ensuring Remelluri Blanco speaks only of the terruño of the place, rather than of any particular grape or process. With Remelluri Blanco, he has achieved something truly unique and singular, with each vintage coveted by the same collectors who search out Chave’s Hermitage Blanc and Montrachet by Domaine Leflaive. Telmo’s Remelluri Blanco illuminates a path forward for world-class, place-based white wines capable of improving in bottle, in Rioja during an era when only the red wines garnered any attention or respect. As with all of the wines of Remelluri, the white wine handsomely repays extended cellar aging and patience. Remelluri Blanco is produced in very small quantities and offered to the best clients of Remelluri.

Vintage – 2017 was a Mediterranean year in Rioja, marked by a historic frost on the 27th of April and the warm summer, which resulted in a very early harvest of a small, excellent quality crop. This was a vintage that favored the microclimate of the Remelluri Blanco vineyards, high in the Cantabrian mountains, producing a fully-ripe wine with excellent balance and potential to develop for years.

Vinification – Bunches are hand selected in the vineyard and fermented with indigenous yeasts in wooden and cement tanks of various sizes, with the different plots kept separate. These separate plots are then aged for 12 months in barrels, foudres, and 1200L concrete eggs. Afterward, the wine is blended and aged for a further eight months in oak barrels.