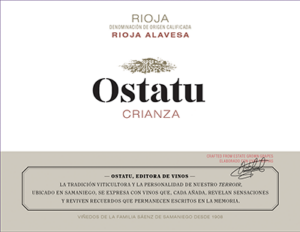 In their role as leaders for sustainability and regenerative farming in their native Rioja Alavesa, the Saenz de Samaniego siblings have obtained their organic farming certification for their entire production in 2022. This task is immensely complicated in Rioja by the fact that they have dozens of tiny plots and each must be certified individually. The standard for organic viticulture is exceptionally high in Spain, making them a model for other nations. The fact that Ostatu exclusively owns and farms the entirety of their single vineyards allows them total control of the production from start to finish. Such is the dedication and commitment of the Saenz de Samaniego family. If this were Piemonte, the wines would cost many times more than they currently do in Rioja Alavesa, exemplifying the inherent value there.

Ostatu Crianza is an outstanding value and introduction to the terruño-driven wines of village-designated Rioja Alavesa. All of the grapes for their Crianza come from exceptional, high-altitude, goblet-trained vineyards of organically-farmed tempranillo, garnacha, graciano, and mazuelo grapes coming from their mountain village of Samaniego at 580m. Samaniego is one of the most important villages in Rioja, providing fruit of the highest quality and structure, ideal for producing long-lived red and white wine. Ostatu Crianza is a fruit-driven and lively Crianza with a singular personality derived from the addition of 20-30% carbonic maceration wine in the blend, which is traditional to Rioja Alavesa.

Samaniego is located directly at the convergence of the Atlantic and the Mediterranean climatic influences, which mold the character of the vintages. The combination of the village’s stony clay calcareous soils, limestone soils, and cool climate also lends a certain austerity and structure to Ostatu wines, which differentiates them from the Rioja wines of other subzones to the south. Ostatu is pure Alavesa mountain wine, born of the tension and energy of an extreme climate.

Vinification – After a manual harvest, some of the grapes undergo a partial carbonic maceration where whole clusters are put into tanks, and fermentation begins intracellularly. The rest are destemmed and undergo fermentation with native yeasts in small stainless steel tanks. Malolactic fermentation takes place in stainless steel tanks. The wine is then racked into new and used 225L French oak barrels for 12 months of aging, bottled without stabilization and with minimal filtration.