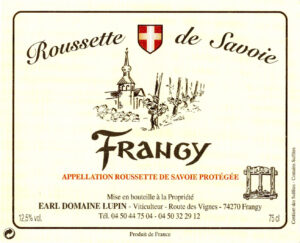 Bruno Lupin’s focus is on his Roussette de Savoie, which many regard as the premier definition of the altesse grape in Savoie. His village of Frangy lies outside of the main production area of Savoie, in the valley of a river called Les Usses. Rather than producing light, quaffable wines made with jacquère, as is the custom in the majority of Savoie, the vineyards in Frangy are predominantly planted with an indigenous grape called altesse, also known as roussette. The village is recognized as a privileged place for altesse. As such, it has the special status of cru de Savoie, one of four villages allowed the right to the Roussette de Savoie appellation with the village name. Within Frangy, Lupin’s estate vineyards all lie on a hillside called Les Aricoques. This slope is fully south-facing, protected from the harsh northerly winds. It captures the sun’s warmth so well that in a small thicket of brush and chestnut in the middle of the hill, cicadas sing in the summer months.

Working with altesse in this warmer microclimate in the village of Frangy, Bruno Lupin produces wines dramatically different from the average Savoie wine. Bruno’s wines are structured with the ability to develop elegantly in bottle for many years.

Vintage – 2019 was a rollercoaster climatically, with frost, hail, and summertime drought, which lowered Bruno’s already-low-yields by approximately 20%. Acidities are excellent, and fruit is fully developed, with no complications during harvest the first week of September. 2019 produced a wine with excellent acidity, fresh fruit, and the concentration to age gracefully. A very successful vintage with lower production.

Vinification – In the winery, Bruno is hands-off with minimal intervention. After a manual harvest, native yeasts start the fermentation in stainless steel, and sulfur levels are kept to a minimum. Malolactic fermentation is partial, around 20%, as he looks for the right balance of body and freshness. The acidities are never corrected (a common practice in the region), and the wines ferment to dryness (less than 4g/liter). The latter point is important, as Altesse has very high acidity, and most producers leave a certain amount of residual sugar to cover that up, to the detriment of the wine’s structure and ability to age.