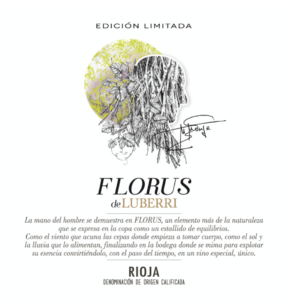 Florus is a radically new natural wine from Luberri, inspired by a reclamation of the traditional winemaking in Rioja Alavesa prior to the French influence on the region in the late 19th century. During this era, wines were made directly in the vineyard, crushed by foot in giant stone lagares carved from granite boulders buried in and around the vineyards of Rioja Alavesa. Florus is produced from Matagallina, a single over 60-year-old estate-vineyard at 450m following the cycles of the biodynamic calendar, in the village of Eleciego in Rioja Alavesa. The vineyard is planted mostly to tempranillo, with a little co-planted moscatel de alejandría in sandy calcareous clay soil. It is farmed by hand, according to biodynamic practices and without the addition of synthetic inputs. Sulfur is not used in the vineyard nor in the production of the wine at any time.

According to Florentino: “We have utilized the natural cycle of the biodynamic calendar from vineyard to bottling to take advantage of all the resources that nature offers us to obtain the maximum expressiveness.”

Florus is Luberri’s tribute to the historic wines of Rioja Alavesa, combining the unparalleled experience gathered through Florentino Monje’s life as a cosechero in the vineyards of Rioja, with traditional natural winemaking methods to achieve the lighter-bodied, fruit-forward wines classic to Rioja Alavesa.

Vintage – 2019 was a small but outstanding harvest in Rioja. The climate in 2019 was more Mediterranean in style over the growing period in contrast to the much cooler, wetter Atlantic conditions of 2018. Warm temperatures led to an early bud break, but the weather at flowering was not ideal due to wind and rain, there was a poor fruit set, reducing yields by 20% to 40%. The summer was generally dry, and as a result, smaller, concentrated berries offer intense flavors. Florus was harvested in the cool temperatures of the early morning during the first week of October 2019, balancing the wine with moderate alcohol, good acidity, and fresh fruit.

Vinification – After harvesting in the early, cool temperatures of the early morning, a manual harvest in baskets, 75% of the grapes are carefully hand-destemmed, while the remaining clusters remain intact. Intracellular alcoholic fermentation begins spontaneously in a stainless steel vat by the native yeasts present on the grapes. After 36 hours, the grapes are then softly pressed by foot and transferred into traditional 500L clay tinajas de barro (amphora) for a spontaneous fermentation of approximately ten days without temperature control. After malolactic fermentation and following the biodynamic calendar to utilize the natural settling of the lees, Florus is bottled directly from tinaja without fining or filtration. Sulfur is not used at any time in the process.