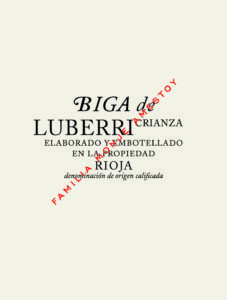 What is Biga, you ask? Biga is the number two in Basque and the name of the second wine Luberri founder Florentino Monje makes in his line, Luberri Crianza. It also happens to be one of his most popular wines, a wine of which we have yet to find anyone who is not a fan. Luberri Biga is complex and layered, fun, lively, and simply delicious-to-drink wine made from the indigenous tempranillo grape. Biga captures the spirit of the wines of Luberri, Rioja wines to drink for pure pleasure at the table. Biga is made from two estate-owned tempranillo vineyards located around the town of Elciego at 520m, grown in clay-calcareous soils in Rioja Alavesa.

Vintage – In 2016, winter was one of the mildest of recent vintages in Rioja Alavesa. Spring was rainy, increasing underground water reserves. Despite the balmy winter, budding came later than usual. Ideal conditions prevailed, and midway through the year it was apparent that the crop would be abundant, so a green harvest and intelligent canopy management were vital to lowering yields. A lack of rain in October and the mild temperatures in autumn provided the ideal conditions when they began harvest on October 1st. 2016 had both exceptional quality and a good quantity of fruit, which is rare in the same vintage. It was a year in which a great cosechero like Florentino Monje was able to show his decades of experience in the vineyard and make wines with beautifully balanced fruit, fresh acidity, and lots of aromatics.

Vinification – A first grape selection is made in the vineyard during harvest, and another in the cellar as the grapes come in. The juice is fermented in stainless steel tanks at 28°C, with a maceration of ten days. The wine is then racked into French and American oak barrels for 12 months of aging.