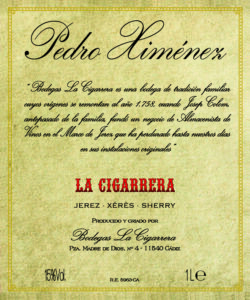 Produced with traditional sun-dried Pedro Ximénez grapes. After the harvest, clusters of grapes are laid out in the sandy flats close to the ocean and left to dry for up to three weeks. Most of the moisture evaporates, then the grapes are crushed and fermented. The fermentation is partial, being stopped by the addition of vinous alcohol, which leaves residual sugars intact. Pedro Ximénez is then aged oxidatively in a solera for a minimum of six years.

La Cigarrera is produced exclusively from vineyards in the Jerez Superior Denomination of Origin. They are located in the original bodega from 1891 in the Plaza Madre de Dios in the Barrio Bajo (lower part) subzone of Sanlúcar de Barrameda, possessing some of the oldest casks in town.

Tasting Notes: La Cigarrera Pedro Ximénez is dark mahogany with notes of plums, dates, cinnamon, licorice, and balsam. Orange peel and lime juice. Subtle hints of bergamot and coriander in the background. Medium-sweet and silky with a full palate and long finish.