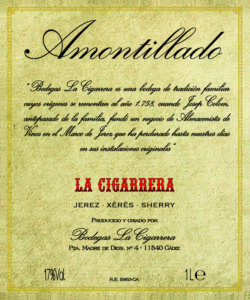 This Amontillado is a minimum of 6 years old. Produced from the palomino grape variety, it is fortified with the addition of vinous alcohol up to 17%. It spends the first four years of its élevage under flor and a further two years aging oxidatively. La Cigarrera is produced exclusively from vineyards in the Jerez Superior Denomination of Origin. They are located in the original bodega from 1891 in the Plaza Madre de Dios in the Barrio Bajo (lower part) subzone of Sanlúcar de Barrameda, possessing some of the oldest casks in town.