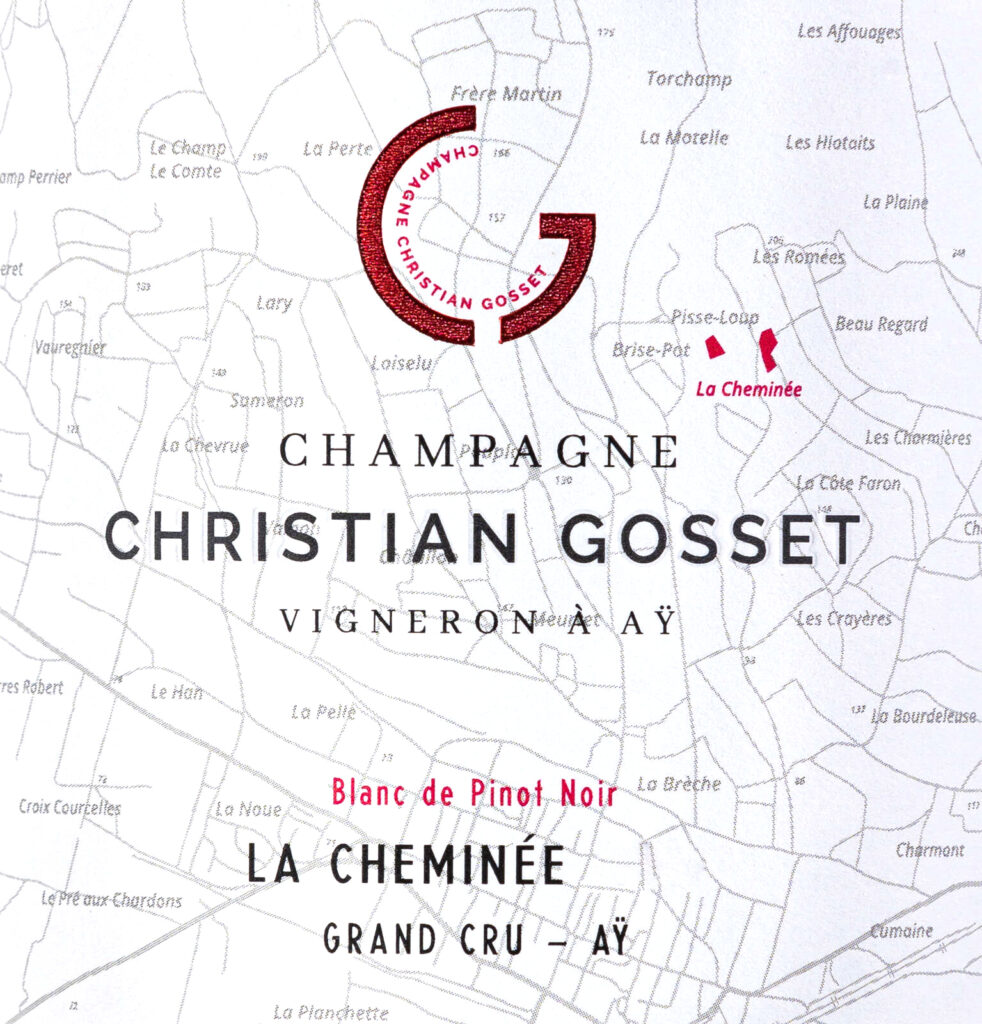 Champagne Christian Gosset is a boutique project by one of the most experienced winemakers and family names synonymous with quality in the village of Aÿ in the Vallée de la Marne. The Christian Gosset style is aromatic, powerful, and structured but always in search of finesse and elegance, with a common thread of verticality, precision, and intensity. Christian Gosset crafts gastronomic Champagnes destined to elevate world-class cuisine with a trademark long, complex finish. Christian’s ethos for his wines follows three tenets: typicity, precision, and pleasure.

Blanc de Noirs La Cheminée is made from two very small complimentary parcels of pinot noir planted on the same hillside in the Grand Cru village of Aÿ in the Vallée de la Marne in chalky soil. The first parcel is called Brisepot, which was planted in 1993 on a very steep, west-facing 45% gradient. Christian works this vineyard wearing mountain shoes with crampons because it is so steep. In this vineyard, he plants various grasses as cover crops to retain soil against erosion. Pisse-Loup sits lower down the same slope and directly across from his Loiselu parcel.

Brisepot and Pisse-Loup are usually blended to make La Cheminée because 3000kg is the minimum required to use the Coquard press. Produced only in exceptional vintages in tiny quantities, La Cheminée represents a powerful and transparent expression of the intensity of the Aÿ mountainside.

La Cheminée offers ripe red fruits, toasted brioche, a very pure, linear texture without austerity, and a very long finish in the mouth. This is Grand Cru Aÿ pinot noir at its finest, destined to develop further in bottle.

Vinification: Bunches are hand-picked in small baskets with a strict selection in the vineyard. Winemaking is low-impact and low-intervention, with the pressing done at his neighbor Jean-Baptiste Geoffroy’s winery in a traditional Coquard basket press. The coeur de cuvée arrives by gravity into Christian Gosset’s cellar, directly into new and used 228L French barriques, where it undergoes both alcoholic and malolactic fermentation. The wine is only moved twice: once into the fermentation barrel and once into the bottle. As Christian says, “let the wines ferment quietly, and then we meet again in July for the bottling.” The wine remains in the barrel completely undisturbed for 11 months without bâtonnage until bottling, which is important to avoid any oxidation. As a result, little to no sulfur is needed because the wine is not moved.

La Cheminée produces six barrels of wine, and only one new barrel is introduced each year; the others are between two and five years old, and all are produced by Tonnellerie de Champagne. Christian Gosset Champagnes are raw and natural, with no fining, filtering, or cold stabilization. He doesn’t feel the wine needs to be totally clear because disgorgement removes any potential sediment. All wines are aged in his cellar for a minimum of three years on the lees before disgorgement, regardless of the vintage.

→ Back to Christian Gosset