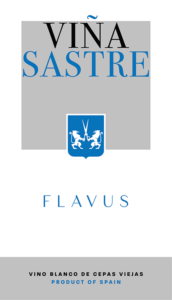 In Pago de Santa Cruz, a small amount of white cayetana blanca grapes have always existed alongside the red tempranillo, co-planted and traditionally mixed into the field blend destined to be one of Spain’s most iconic wines. Through Jesús Sastre’s good friend and Rías Baixas pioneer Gerardo Méndez, they first researched and separated the white grapes from the blend, making the first Flavus in 2007 to make a simple, charming white wine for near-term consumption. Ribera del Duero does not have much of a tradition for white wines, so the initial concept was to make something simple and humble. Instead, they discovered through the cellaring and consistent tasting of verticals of Flavus over the years that the wine is capable of improving in bottle for a decade or more, leaving tasters stunned by the unique, complex flavors which develop. There is no designation for Ribera del Duero blanco, so while this mighty blanco may be a “Reserva” qualitatively and spiritually, bureaucratically, it carries the humble Vino de Mesa designation. Perhaps in the future, the appellation will see the same possibilities for value and quality in their white wines as their more famous reds.

Vinification – Following a manual harvest, the wine spontaneously fermented with native yeasts in stainless steel. No malolactic fermentation. The wine was racked and aged in stainless steel for ten months, followed by two years of bottle age prior to release.

→ Back to Viña Sastre