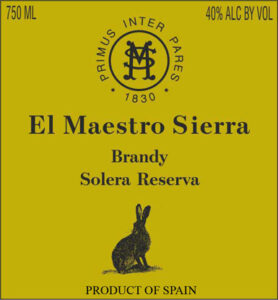 El Maestro Sierra was founded in 1832, by master cooper José Antonio Sierra. At the outset, El Maestro Sierra faced some hardships, in large part due to his esteemed reputation as a cooper. It was very uncommon for a craftsman to open his own winery in an industry that was, and in many ways still is, backed and run by nobility. Over time, José surpassed his reputation as a master carpenter, to become one of the region’s most respected almacenistas, gaining a reputation for understanding how wine and brandy develops in the barrels of the solera system.

Today, the bodega is owned and operated by women, in a region where this almost unheard of. Pilar Pla Pechovierto, the widow of a direct descendent of José Antonio Sierra, has revitalized the winery after a period of dormancy, when the family lost interest in running the operation as a commercial entity. Ana Cabestrero is the bodega’s capataz, or wine taster, who works the cellars and guides the wines and brandies to their true expression.

Brandy de Jerez has long been made in the region, but very little is consumed outside of Spain. El Maestro Sierra bottles two brandies, a Reserva with a minimum age of 20 years and a Gran Reserva with a minimum age of 40 years. The entire solera consists of only 7 butts of old Oloroso casks, a few of which date back to the very founding of the estate. The Gran Reserva is bottled only once a year, with 40 bottles available for export. The Reserva is bottled twice a year, with only 500 bottles available for export.

→ Back to El Maestro Sierra Spirits

→ Back to El Maestro Sierra