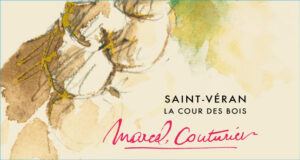 Marcel’s Saint-Véran La Cour des Bois is made with chardonnay fruit from his 70-year-old vines at the very southern end of the appellation near the village of Chânes, in Saint-Véran. This site is unusual for the southern Mâconnais, being the remnants of a ridge of an ancient riverbed. La Cour des Bois is a small plateau with ancient alluvial soils, featuring shallow clay and limestone along with sandstone and pebbles. This particular terroir gives the wine an airy, fresh, crisp quality, which is something  Marcel seeks to emphasize.

His approach is the definition of natural, employing the lowest intervention winemaking imaginable; the wine is put into barrel and left there until right before the following harvest, following the rhythm of the seasons. His wines offer incredible delicacy with aromatic purity and complexity as a result.

Vintage – 2018 was a dream vintage in the Mâconnais, providing generous volumes and superb quality. Rain was a key player in shaping the 2018 vintage. It was very present in winter, allowing the vines to establish some reserves before a particularly hot and dry summer. The plants were in great shape, helped by nice weather in the springtime, and flowering was perfect, resulting in abundant, generous bunches. No major weather events upset the growth cycle, and the harvest began during the last ten days of August, continuing until the end of September with a lovely, healthy crop. The wines offer remarkable aromatic intensity, and they are balanced, with impressive structure.

Vinification – Whole bunches are hand-harvested and pressed, followed by a static settling in a stainless tank to naturally precipitate solids. Marcel does not add sulfur to the grapes when they arrive at the winery. He is notable for being a complete non-interventionist in the cellar, utilizing spontaneous, native yeast fermentation that takes place deep in his cold cellar in Loché. The resulting fermentations are long and cool, as Marcel never rushes his fermentations by warming the cellar. Both alcoholic and malolactic fermentations occur naturally in traditional Burgundy barrels for 12 months. He retains some of the gross lees during fermentation, resulting in a small amount of skin contact during both fermentation and élevage. Once the wines are in the barrel, they are basically left alone from that point until they are racked and bottled before harvest the following year. The wines ferment and age in the same barrels without racking and bâtonnage, as Marcel is wary of making the wines too fat and leesy. The wines are very low-sulfur. The production of this cuvée is approximately 3000 bottles.

→ Back to Marcel Couturier