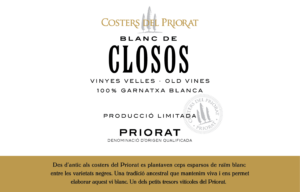 With all of the focus on the red wines of Priorat, it is remarkable that it is the white wines that can be the most surprising, exotic, and profound. Since the old days, the region’s steep slopes, locally known as costers, have been planted with white varieties mixed in among the predominant garnacha and samsó (carignan). This practice is a valued element of the wine heritage in Priorat. In the closos (small vineyards) around Bellmunt, among the old red grape vines, we can still find some white varieties that are used to make Blanc de Closos.

Priorat blanc dazzles with an exquisite juxtaposition between exotic fruit and lacy slate minerality. These are white wines that defy categorization. Tiny amounts of the historic brisat (skin-contact) wine called Blanc de Closos are made at Costers del Priorat as a tribute to the tradition of Priorat. Old, organically-farmed garnacha blanca bush vines, planted on red slate soils on the apex of the Mas Alzina vineyard in Torroja at 650m, provide the acid backbone and structure. Blanc de Closos is a limited production wine made from a field blend of mostly garnacha blanca, with small amounts of macabeo, moscatel grano fino, and cartoixà. Wines are made with low intervention and minimal sulfur at bottling.

Vintage – 2019 saw less rain than usual over the winter and spring in Priorat, and the most significant weather event was a four-day heatwave in late June and early July. Thankfully, the rest of the summer was cooler than usual allowing slow and steady ripening and no signs of dehydration.

Some light rain was welcomed in September ahead of several weeks of moderate temperatures, which resulted in steady and complete maturity of grapes and an ideal harvest.

Vinification – After a manual harvest, the grapes are selected, destemmed, and crushed by foot. The wine ferments spontaneously, and the skins remain in contact with the wine for 4 months in a used 600L French oak barrel.

→ Back to Costers del Priorat