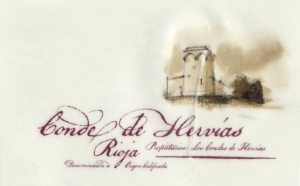 Conde de Hervías is an incredibly unique and specialized micro-winery in northern Rioja Alta, where the sole focus is producing single-vineyard wines of the highest quality from historic vineyards in the village of Torremontalbo. Íñigo Manso de Zúñiga Ugartechea, together with his winemaking partner and wife, Yolanda García Viadero, work highly prestigious plots of pre-phylloxera vines near their home in Torremontalbo, an incredible structure built in 1252 by the Visigoths. The property lies on the right bank of the Ebro River, in the Rioja Alta subzone of Rioja, where Atlantic climatic influences dominate and produce wines with outstanding aging potential.

The flagship Conde de Hervías cuvée is produced from the Las Arenillas vineyard in the heart of Torremontalbo at 475m. Conde de Hervías is only produced in the best vintages and in minimal quantities. Las Arenillas is one of the oldest and most famous pre-phylloxera vineyards in Rioja, with vines planted on their original rootstock in 1874 by Don Nicanor Manso de Zúñiga, the Count of Hervías, and his brother Don Victor Cruz, founder of the School of Oenology in Haro. To their amazement, the vines of their Las Arenillas vineyard survived the phylloxera epidemic due to the sandy nature of the soil, while louse wiped out the majority of the indigenous vines throughout the region. The indigenous tempranillo and graciano cuttings from Las Arenillas were utilized in the grafting of traditional Rioja varieties on American rootstocks in the wake of the phylloxera crisis.

The traditional goblet (bush training) method is used in the vineyard, which helps preserve acidity and freshness in the wines and guards against heat damage. Conde de Hervías is produced from hand-picked, organically-farmed grapes, of which roughly 90% are tempranillo and 10% are graciano. Native yeasts are utilized for spontaneous alcoholic fermentation, bringing the character of the vineyard to the wines. Recently, he has been utilizing a method called integrated fermentation, where alcoholic and malolactic fermentations happen simultaneously, bringing great harmony to the wine. Finally, the aging process is never hurried; the estate releases small quantities of each wine only when the time is right for each one to express its personality.

Vinification – Bunches are hand-harvested with a strict selection in the vineyard, completely destemmed and crushed, with 80% of the must fermented in 1500L used French open-top barrels with native yeasts. The must goes through “integrated fermentation” in barrel, where alcoholic and malolactic fermentation happen simultaneously. The remaining 20% is fermented in stainless steel with native yeasts, undergoing spontaneous malolactic fermentation. The wine is then aged for 18 months in 228L new French oak barrels. Bottled unfined and unfiltered.

→ Back to Conde de Hervías