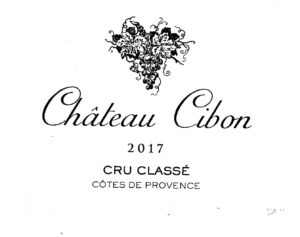 Château Cibon Cuvée Marius is a tribute to Marius Roux, the modern founder of Clos Cibonne and defender of the tibouren grape in Provence in the 1800s. Marius Roux, born in 1875, led the estate’s destiny, passing it to his wife Valentine, who inherited the lands around the Castle of Cibonne. It was Marius who first focused the estate solely on wine production. The label is a recreation of the original labels of the late 1800s, when the winery was called Château Cibon. This design predates their iconic labels designed in the 1920s, which still adorn their other cuvées today.

The Château Cibon Cuvée Marius is inspired and informed by the incredible vintages of Clos Cibonne, which survived and improved in their cellar from top vintages of decades past. It bears remembrance when drinking the really old wines at Cibonne. Old methods of (slightly) higher alcohols and phenological ripeness, combined with barrel aging, built classic wines with the structure to age and improved for a long time. Utilizing similar techniques, albeit with a modern winemaker’s knowledge and tools, they have managed to craft a beautifully rich and complexly structured wine, built to develop for decades to come with proper time in the cellar.

The vineyard, one of 18 Crus Classés of Côtes de Provence, consists of organically farmed, traditional goblet trained vines located close to the Mediterranean Sea in the foothills of the Maures mountains, overlooking Toulon’s harbor. Cuvée Marius is made from a single over 60-year-old parcel just 800 meters from the ocean with extremely low-yielding vines producing no more than 26 hl/ha.

Vinification – Following an early morning manual harvest, the grapes are all destemmed and directly pressed. Native yeasts then ferment the must in new 2600L French foudres. These are temperature-controlled for a long, slow fermentation, which enhances the aromatics. The wine then spends 24 months in the same foudres, with regular bâtonnage for the first six months.