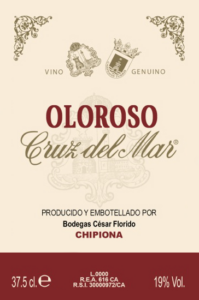 Vinification – Cruz del Mar Oloroso is produced exclusively with palomino grapes grown by César’s family in the Balbaína and Miraflores pagos (vineyards). After harvesting, the grapes are crushed and undergo alcoholic fermentation in traditional cement vats, which naturally regulate the temperature. Fuller-bodied musts are chosen for Oloroso, and after being fortified to 18% ABV., the wine is aged oxidatively in old barrels in a bodega in the heart of Chipiona. Cruz del Mar Oloroso spends an average of 12 years in the solera process before being bottled en rama, without fining or filtration.