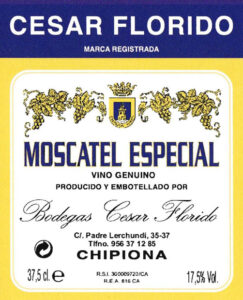 César Florido’s name is synonymous with moscatel. His moscatel is the reference point for the classic, balanced sweet wines of the zone, characterized by notes of orange blossom, jasmine, and a honeyed, raisiny palate. His village of Chipiona, with its sandy-clay soils, is well adapted to the grape variety and has the best moscatel vineyards in the region. These concentrated wines, made from shriveled grapes, can acquire enormous complexity with a long period of cask aging.

Vinification – Moscatel Especial is made from late-harvested moscatel grapes from his family vineyards planted on the sandy clay soils of Chipiona. After harvesting, grapes are destemmed and pressed and allowed to start a spontaneous fermentation with natural yeast, undergoing alcoholic fermentation in traditional cement vats, which naturally regulate the temperature. The fermentation is then stopped before completion with the addition of a neutral grape spirit, leaving quite a bit of natural sugar. The Especial then sees the addition of traditional arrope, which gives the wine its unique complex flavors. Arrope is boiled moscatel must that is reduced until it is a thick syrup, which is then aged in its own solera for decades before being added to complexify a base wine. Arrope is an ancient part of winemaking in southern Spain, dating back at least to the Phoenicians. In Roman gastronomic journals, arrope appeared under the name of defrutum and was used principally in the natural conservation of certain types of foods. In the 20th century, arrope had nearly been lost due to the difficult elaboration process, but historic bodegas like César Florido continue the tradition. The wine is then aged in old barrels in the solera system in his Chipiona bodega for two years.