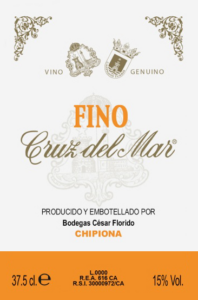 César Florido owns three separate bodegas in Chipiona, one of which houses his iconic Cruz del Mar Fino solera, just 50 meters from the ocean. With the closest proximity to the sea of any bodega in the region, his wines are imbued with the very spirit of this maritime climate through year-round, thick, luxurious flor. His Fino is made from estate-grown palomino from the Balbaína and Miraflores pagos. Paired with fresh oysters or tiburon frito, Cruz del Mar is a guaranteed gastronomic supernova.

Vinification – Cruz del Mar Fino is produced exclusively with palomino grapes grown by César’s family in the Balbaína and Miraflores Pagos (vineyards). After harvesting, the grapes are crushed and undergo alcoholic fermentation in traditional cement vats, which naturally regulate the temperature. After fortification to 15% ABV, the Cruz del Mar Fino spends three years aging biologically under a continuous veil of flor in very old barrels, in a bodega located just 50 meters from the Atlantic ocean. It is bottled en rama, or unfined and unfiltered, directly from cask to deliver the true essence of biologically aged fino Sherry.