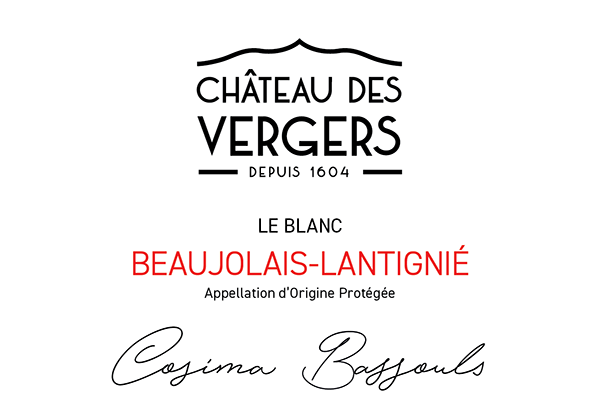 Cosima Bassouls is a young, charismatic leader of the bucolic Beaujolais-Lantignié region. Cosima has a vision for Lantignié, and it involves combining the strengths of the region’s long viticultural tradition with her progressive and innovative environmental plan. She began the conversion of all 6ha of family vineyards to organic farming in 2019, utilizing agroforestry and cover crops to create an integrated landscape that brings nature into the vineyards. She utilizes 15 different cover crops, rotating and adapting each to suit the needs of the parcel, which creates natural biodiversity and a true polyculture with healthy, living soil, which also counteracts erosion. Cuvée Le Blanc is a single vineyard at 300m planted to chardonnay by Cosima’s parents in 2006. The parcel is south/southwest facing with pierres bleues (blueschist) soils. Her winemaking is as it has been in the region for centuries. Sulfur is not used in the winemaking process, and she adds only a small amount at bottling if needed. Her objective is “to produce terroir wines that are alive, with a soul,” wines that are as natural as possible, but also clean wines, without defects, as she has great respect for her customers.

Vintage – The winter of 2020 was very mild and led to an early bud break in March. April and May were warm and dry, and while June began with cool, rainy weather, it quickly turned into scorching hot days. July and August were milder—relatively speaking—with little rain (July was the third driest since 1963), leading to drought conditions. In the end, harvesting began on August 20,  the second earliest recorded harvest date since 2003. Despite these challenges, the weather conditions meant there was little disease in the vineyard, and the health and quality of the vintage were very high.

Vinification – Whole bunches are handpicked in small crates, selected in the vineyard, followed by a very gentle and slow pressing using the château’s centuries-old vertical press. The press also yields a naturally clear must that does not need to be filtered or clarified. Fermentation begins with a pied de cuve of native yeasts in neutral fiberglass containers. The wine spends eight months on the lees in concrete tanks without bâtonnage, where it undergoes spontaneous malolactic fermentation. Sulfur is not used in the vinification process; a small amount is added at bottling.

→ Back to Château des Vergers