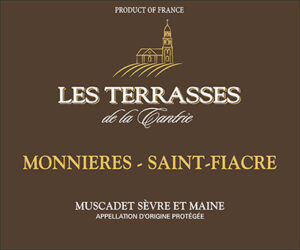 The Chéreau Carré winery is run by the father and daughter team of Bernard Chéreau, the second generation, and Louise Chéreau, the third. Their family origins in the region reach back to the 11th century. The founder of the winery, Bernard Chéreau, Sr., was the first to age Muscadet wines on lees, a method that became an integral part of the appellation in 1977. Both father and son pioneered bottle-aged Muscadet meant to improve with time in the cellar, and they were the first in the region to emphasize this quality. Louise Chéreau is carrying that vision into the future, continuing the family philosophy of focusing on Muscadet Crus Communaux, single vineyards, long aging, and absolute quality.

Château de la Cantrie is eleven hectares of terraced vineyard overlooking the Sèvre river where the soil composition is mostly volcanic schist, part of the Armorican massif in the zone of Monnières Saint-Fiacre, now part of the Muscadet Crus Communaux designation.

Monnières-Saint Fiacre, which lies a little southeast of Nantes, is one of ten villages certified in the classification of Muscadet de Sèvre-et-Maine called Crus Communaux, produced from low-yield vineyards and aged a minimum of 24 months on the fine lees. With a succession of hills rising along the left bank of the Sèvre and a series of knolls rising along its tributaries, Monnières-Saint Fiacre is located at the heart of the region’s Crus Communaux. The silty, sandy soils on these steep slopes are fine in texture and moderately deep, with a higher concentration of clay and decomposed gneiss.

The wines of Monnières-Saint Fiacre are fleshy and creamy in texture, with a subtle yet refreshing touch of bitterness at the finish. They deliver aromas of citrus fruit, orange blossom, and exotic fruit, often combined with balsamic notes like wax or honey.

The winery’s goal is to produce exceptional terroir-based wines capable of improving in bottle for many decades.

Vinification – After hand-harvesting, alcoholic fermentation occurs with native yeasts in temperature-controlled stainless steel tanks. After fermentation, the wine ages on the lees for 35 months in underground cement tanks before bottling. Wines age in bottle at the winery for two to five years before release. The wine is produced only in the best years.