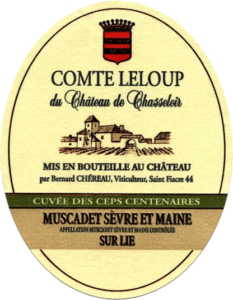 Domaines Chéreau Carré occupies one of the most privileged positions in the Loire-Atlantique department of France, in the heart of the Muscadet Sèvre-et-Maine appellation, directly at the confluence of the two rivers. This family-owned winery has been an innovator since the 1960s by focusing on the qualitative advancement of the Muscadet Sèvre-et-Maine appellation through their exploration of their numerous single vineyards.

The first terroir and family home is Chasseloir, a vineyard with schist soils in the heart of the Muscadet Sèvre-et-Maine appellation, right between Saint-Fiacre-sur-Maine and Château-Thébaud, on the hillsides above the river Maine. The Chasseloir farm was purchased in 1953 by Bernard Chéreau Senior. Cuvée Comte Leloup comes from a 5ha site at the entrance to their home, called Château de Chasseloir, with a vine age of over 100 years. These vines are the oldest in the Muscadet region. Hand-harvested grapes are brought to the Chasseloir vinification cellar, which is built on a hillside. The work here is done exclusively by gravity, without the use of pumps, which can cause oxidation and decrease the aromatic potential of the wines, an attribute Bernard feels is important for the wines of Muscadet. For the same reason, only indigenous yeasts from the vineyard are used in fermentation. Comte Leloup always sees extensive bottle aging before release and is produced only in excellent vintages. As a result, Comte Leloup will age for more than 20 years, proving to be one of the best values in wine.

Vinification – Manual harvest was conducted with great care taken to keep the grapes whole until they entered the press. After fermentation in temperature-controlled stainless steel tanks, the wine is aged 14 months on the lees with regular bâtonnage. After bottling, the wine rests for a minimum of two years before going to market.