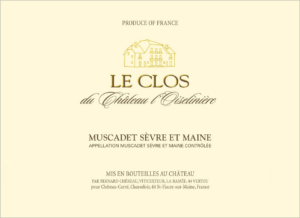 Château de l’Oiselinière is a 10ha vineyard that has belonged to the family since 1960. The vines here are planted on a sunny, south-facing orthogneiss dome, near the village of Vertou, directly at the confluence of the Sèvre and Maine rivers. The vineyard is in a very idyllic setting within a natural clos, protected on one side by the surrounding woods and the other sides by the rivers (which also moderates temperatures for even ripening). Here, they produce two wines from schist and orthogneiss soils: Château l’Oiselinière de la Ramée from eight hectares of 40-year-old vines and this wine, Le Clos du Château l’Oiselinière, from four hectares of 80-year-old vines at the very top of the dome. Great vintages of Le Clos are capable of aging gracefully for decades in bottle.

Le Clos du Château L’Oiselinière is certified in the new classification of Muscadet called Crus Communaux, produced from low-yield vineyards and aged a minimum of 18 – 24 months on the fine lees. Le Clos’s orthogneiss terroir is included in the Cru Communal du Muscadet La Haye Fouassière, the westernmost Cru of the Muscadet Sèvre et Maine appellation. The wines of La Haye Fouassière are from one of 10 villages that can be recognized on the label. Gneiss is a metamorphic rock rich in minerals such as quartz and mica, forming a sandy loam soil with a high capacity for heating and mineralization. The Cru occupies a privileged location, literally directly between the two rivers, Sèvre and Maine, occupying a central position among the Crus of Muscadet.

Vintage Notes – 2015 produced an exceptional Le Clos with all of the structure to age gracefully for decades to come. Acids are ample, with complex aromatics and an elegant texture on the palate. Buds appeared late, avoiding the spring frost. The summer of 2015 was dry with average temperatures. Rainfall in early September balanced the hydric stress during heat spikes midsummer. The old vines of Le Clos performed particularly well, with harvest taking place in early September.

Vinification – After a manual harvest, alcoholic fermentation occurs in temperature-controlled stainless steel tanks. The wine is then aged for 31 months on the lees in underground concrete vats. After bottling, the wine rests for a minimum of two years before going to market.