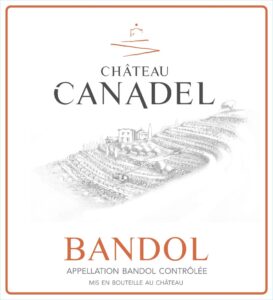 Château Canadel’s Bandol rosé is made exclusively from mourvèdre, cinsault, and grenache grown on their organically-farmed estate vineyards, located on a unique terroir in the hamlet of Le Plan du Castellet, within the famed terraces of Bandol. The vineyards of Canadel are planted on a geological anomaly: the inversion of soil layers from the birth of the Alps, known as the Renversement du Beausset. This event resulted in the Triassic layer (200 million years old) flipping on top of the Cretaceous layer (65 million years old) due to the subduction of a tectonic plate, which has surfaced the oldest rock outcroppings in the whole of the appellation.

This single-estate terroir’s microclimate yields elegantly structured rosés, which originally gave the Bandol region international fame. Canadel rosé is a far cry from the cheap, quaffable tourist rosé of dubious origin produced throughout Provence. Instead, while it can be enjoyed young, it is structured to age in bottle, similarly to any great white wine. As a result, we give Canadel’s Bandol rosé additional time to mature in bottle before releasing it to the US market.

Vintage Notes – After a vintage that was generous with rain and grapes, 2019 was the extreme opposite of 2018. After autumn and winter rains allowed the soil to recharge with water, the first buds broke out timidly at the beginning of April. The vines began to grow slowly, in a cool spring. The last drop of rain fell on April 7, leaving drought conditions for five months. The hot summer arrived late on June 20. Fortunately, the month of August was relatively temperate, with often cool nights and beautiful morning dews. Harvest began on August 29 with grenache and cinsault for the rosé. Although very small, the berries were perfectly healthy, with plenty of acidity. Mourvèdre was harvested directly after. Harvest was completed on September 13, with 30% fewer grapes but very high quality.

Vinification – After a manual harvest, the grapes are all destemmed. The mourvèdre and cinsault are then directly pressed, while the grenache macerates for 24 hours at 12°C. Fermentation lasts 20 days and is followed by six months of élevage in stainless steel and concrete tanks.