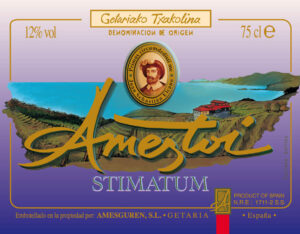 Stimatum, meaning esteemed, is Ameztoi’s limited red txakoli. It is produced exclusively from the local, indigenous hondarrabi beltza variety, grown on traditional trellises high on the slopes rising above Getaria, an ancient Basque fishing village on Spain’s rugged northern coast. In the 2000s, when almost all of the other local wineries gave up on the indigenous red hondarrabi beltza vines, the Ameztoi family retained their old vines, giving their wines such exceptional vibrancy and complexity. Stimatum is inspired by the historic claret-style wines which were once produced in the area before phylloxera. The backbone of the blend comes from an old hondarrabi beltza vineyard planted in 1840, preserved by the Ameztoi family for generations. The traditional style of Stimatum is true to the origins of the Getariako region’s winemaking tradition, a low-alcohol wine with a luminous, refreshing frame and the signature spritz of natural, residual CO2. It is a fantastic, natural accompaniment to the local calamares en su tinta, squid served in its own ink.

Vintage – 2019 was a classic, cooler vintage in Getaria for lovers of minerality, with racy acidity and fresh herbal flavors layered on top of stone fruit and flavors from the old vines. Low yields gave a well-balanced wine with a harmonious structure that should develop nicely in bottle. The cooler vintages for Ameztoi tend to have the longest aging potential.

Vinification – Ameztoi Stimatum is traditionally crafted with high acidity and low alcohol, utilizing only the native hondarrabi beltza variety. After hand-harvesting, the must ferments in temperature-controlled steel tanks using indigenous yeasts from the vineyard, with 20 days of skin contact. Towards the end of alcoholic fermentation, the tanks are closed to preserve the natural carbonation from fermentation, which is the preferred style of Getaria. After resting for six months on the lees, the wine is bottled directly off the fine lees from the tank, cold-stabilized, without filtration.