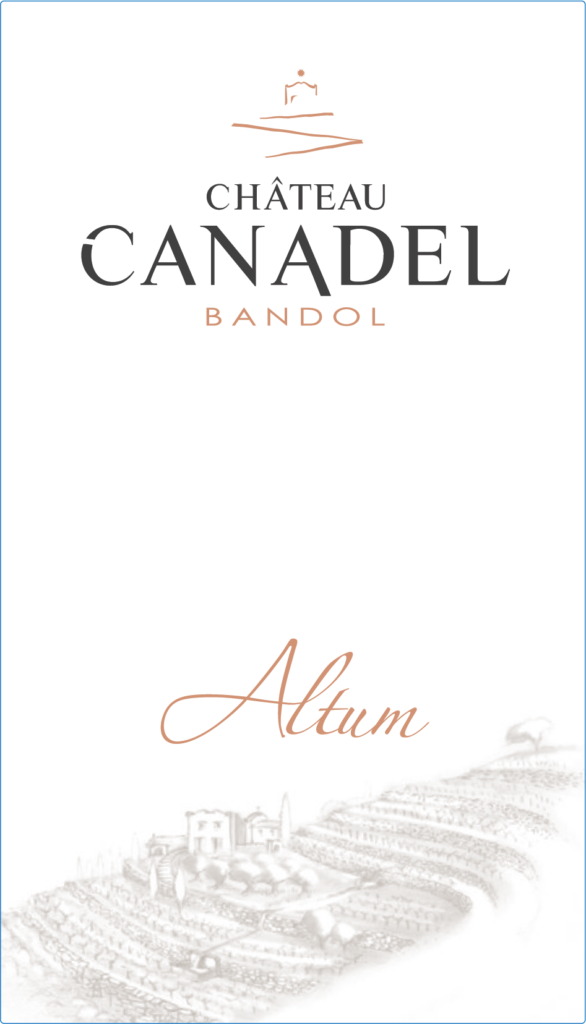 Château Canadel is made exclusively from organically-farmed estate vineyards, located on a unique terroir in the hamlet of Le Plan du Castellet, within the famed terraces of Bandol. The vineyards of Canadel are planted on a geological anomaly, the inversion of soil layers from the birth of the Alps, known as the Renversement du Beausset. This event resulted in the Triassic layer (200 million years old) flipping on top of the Cretaceous layer (65 million years old) due to the subduction of a tectonic plate, which has surfaced the oldest rock outcroppings in the whole of the appellation. Canadel is one contiguous property, which makes it a singular reference in Bandol.

Cuvée Altum comes from extremely low-yielding 40 year-old bush-trained mourvèdre vines in the highest part of the estate’s vineyards at 250m, directly facing the Mediterranean sea. The soil consists of very deep clay, with calcareous marl. Mourvèdre performs it’s best at this altitude, with deep soils and a gently windy climate, between strength and elegance. Altum will repay patience handsomely, improving in bottle for 15 to 20 years.

Canadel is focused on making soulful, broad-spectrum, cinematic red wines befitting of the Bandol appellation. Certified organic viticulture with biodynamic principles are used in their vineyard, with all work done by hand on the terraces. All movement in the winery is by gravity flow, and wines are bottled unfiltered, without manipulation.

Vintage – 2017 began with a cool winter with heavy rainfall, allowing the vines to recharge from previous drought conditions. Spring came early with warm conditions and by March 20th the first buds began to blossom. However, the cold weather returned with very cold mornings and a dramatic hail episode on the 5th of April that destroyed many buds. This weather drastically slowed down the growth cycle. In May, with nice weather conditions and some rainfall, growth accelerated with particularly heavy vegetation. The first heat waves came in June and summer progressed without rainfall. The harvest started very early, beginning on August 23rd, lasting until September 6. It was the earliest harvest of the decade so far.

Vinification – The grapes are hand-harvested and go through a severe selection process in the vineyard before being sorted again at the winery and de-stemmed. The fermentation with indigenous yeasts lasts 20 days in concrete tanks, with gentle pumping over once a day. The wines are then aged 18 months in the traditional oak foudres of 3000L and 8000L and bottled unfiltered. 32 hl/ha yields.